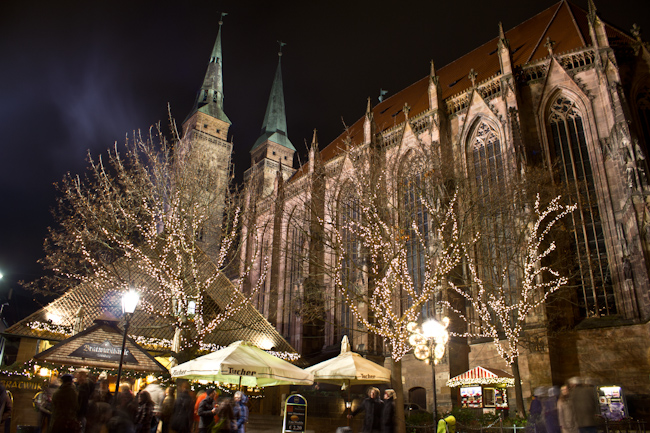 Even though Dresden has the oldest Christmas market in Germany, Nuremberg’s is the most well known and one of the biggest and most authentic. By authentic I mean all the stalls are made from natural products and everything sold is hand-made and/or produced locally. You won’t find any plastic or foreign made toys here. I love that they’re so strict about what goes on sale as some Christmas markets (hello Paris) sell a lot of cheap/plastic crap. 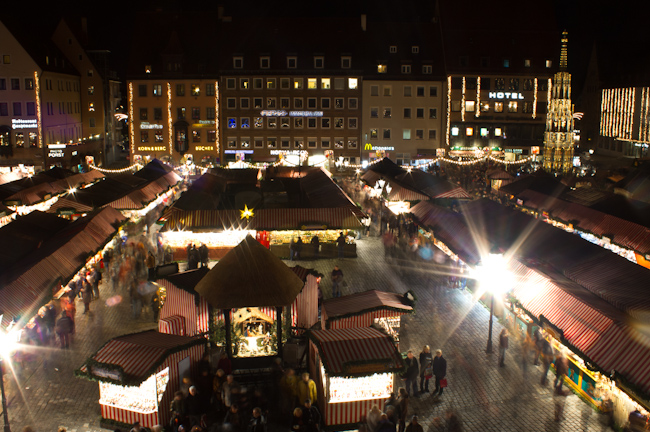 As per usual, my focus at the markets was on food and drinks. Let’s start with the drinks as you’ll need a few to warm up on the cold winter days they have in Germany. Gluhwein or mulled wine as us English speakers like to call it is almost mandatory and it should be. I’m not a huge fan of the heavily spiced kind and I quite the hot cider you get as some markets but to really warm up you should give feuerzangenbowle a try. This unpronounceable drink is just mulled wine with rum and sugar; a brilliant combination. 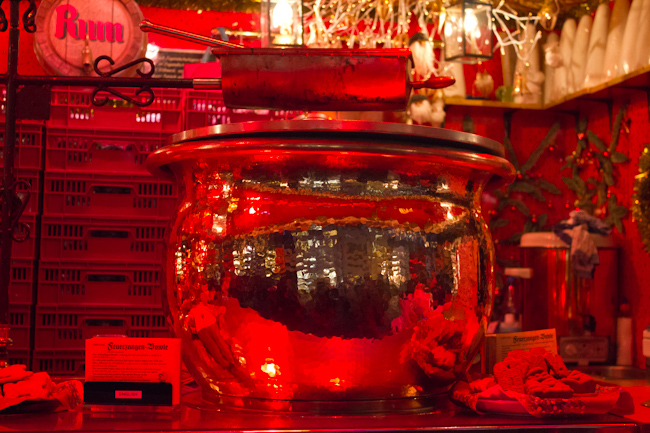 I must confess that I’m not really a vegetarian. Nor am I semi-vegetarian or pescatarian. I’m just a pickytarian. So in attempt to be a little less picky, I did try Nuremberg’s specialty, the famous Nuremberg Bratwurst. At the Christmas markets you’ll be served your bratwurst 3 to a bun but at a restaurant you’ll most likely get between 8 and 15! 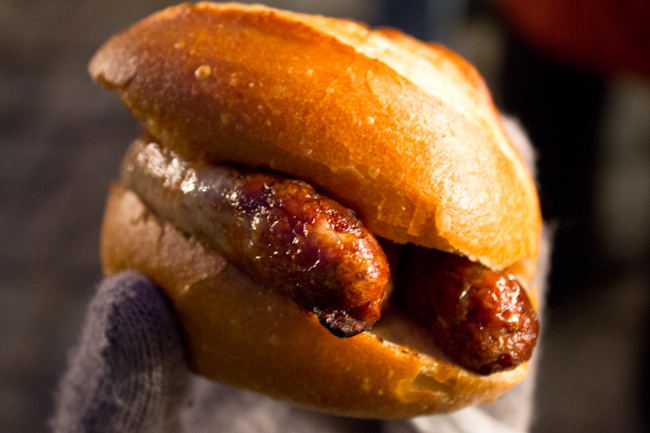 The next most famous Nuremberg snack is Lebkuchen. This is usually translated as being gingerbread but it’s quite different to the gingerbread I know. Traditional Lebkuchen is made with nuts and no or little flour. It’s quite soft and almost like a cake rather than a biscuit. The gingerbread I’m familiar with looks more like this but according to the locals it’s not edible. 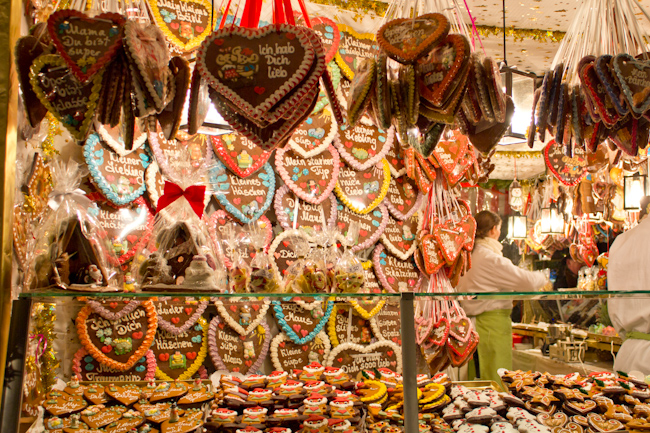 Another very tasty, very rich and very non-vegetarian dish is kartoffelpuffers. As some of you may know, I’m not one to say no to a potato and deep fried hash browns with cranberry sauce is difficult to resist. I was a little less enamoured when I discovered they are cooked in lard but when in Nuremberg… 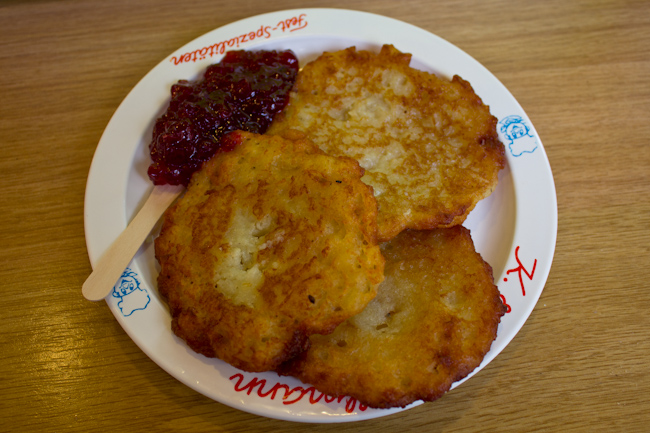 After eating up a storm I discovered there is a lot more to the markets than food. There are some really cute, typically German products which you can decorate your house with or get as gifts. I adored these ‘plum men’ which are, funnily enough, made from plums. I love the story of how one (non-European) visitor took them home and ate them and then wrote to the tourist board saying they didn’t taste that great! 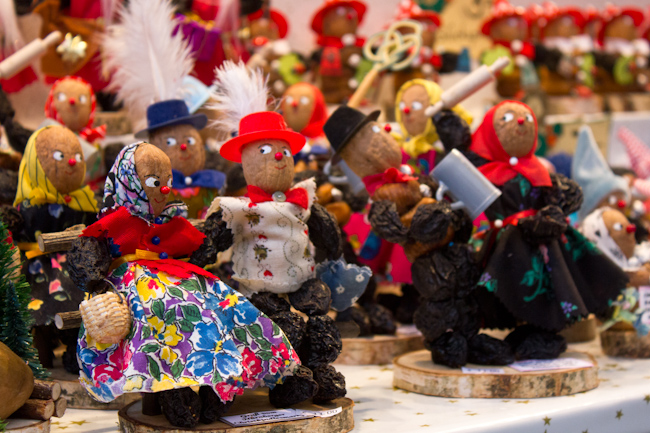 Another fun option while at the markets in Nuremberg is to take a horse and carriage ride where you don’t only get the see the Christmas markets but some of the famous sights in the city. I particularly loved the Beautiful Fountain.

Where to Stay in Nuremberg

Nuremberg is a great city if you love Christmas markets, half-timbered houses and World War II history. There is a lot to see and to be honest I liked it more than I thought I would. The Christmas markets do get mixed reviews as they can get very crowded on the weekends but if you visit during the day during the week you shouldn’t have any problems. If you do find it too busy, there is another smaller market with international stalls from Romania, Italy, Montenegro, the United States and elsewhere which might be of interest. There is also a dedicated children’s market. I only had a day and a half in Nuremberg and while that was enough to see the market I would have liked to have stayed longer to see more of the city and in particular to visit the museums dedicated to Nuremberg’s involvement in WWII. As usual, there is never enough time to see everything. 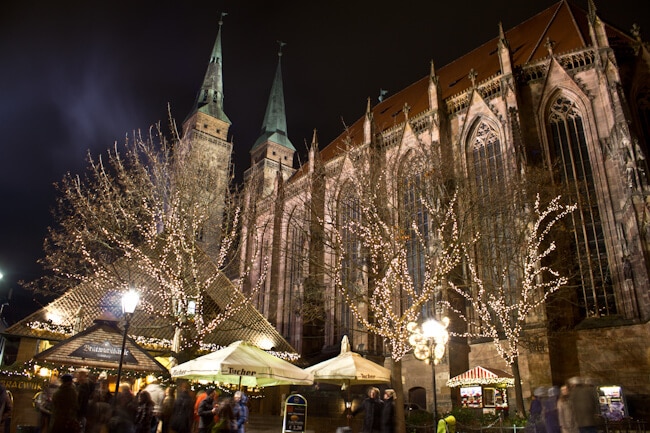