After enjoying a fantastic week travelling through the Tirol region in Austria, I finally had to move on and headed south to Slovenia. In the last few years I’ve become lazy about researching my travel destinations so for this trip my week long itinerary was kind of sparse with only Slovenia’s capital Ljubljana and the famous Lake Bled on my list of things to do in Slovenia.

Thankfully I had a week to discover what Slovenia has to offer but the first thing I realised upon my arrival was that 7 days was never going to be enough to see everything. I had to narrow it down and visit just a few areas of this beautiful little country.

For a small city, Ljubljana has an awful lot of fans. It’s not surprising, the locals in Ljubljana, and Slovenia in general, are extremely warm and welcoming to visitors. They are proud of their country and love to show it off as much as possible. Even during the two minute funicular ride up to Ljubljana Castle the driver pointed out all the famous sights to me. He didn’t want me to miss anything. 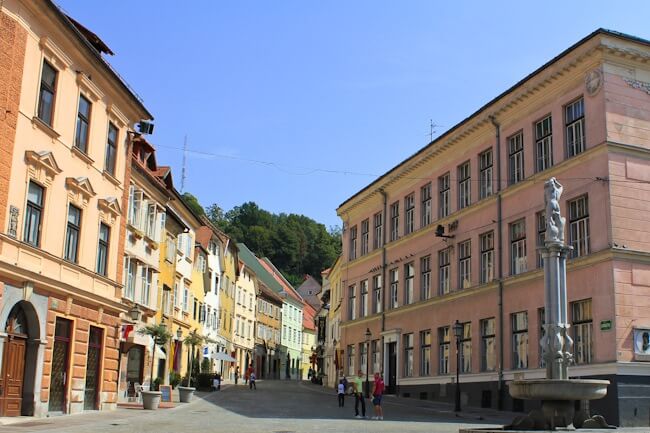 The castle area is free to enter so you can walk around and take in the views or sit in one of the cafes for a Slovenian meal or coffee. For a small fee you can visit the museum which details the history of the castle but also gives you access to the chapel and viewing tower. There is an outdoor cinema in the courtyard in the summer months but were arrived too late in the year for that so just wandered around instead. 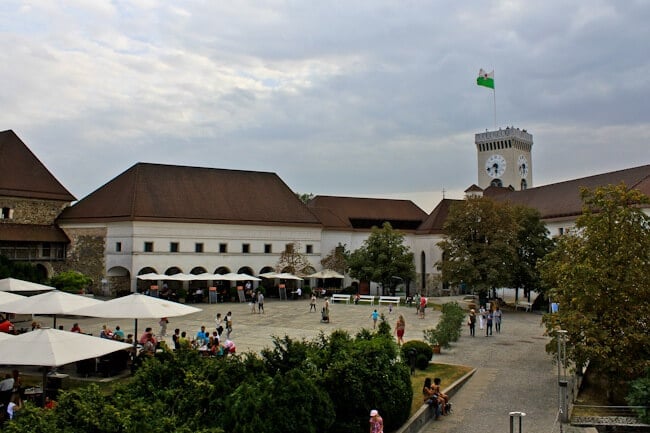 Ljubljana’s real charm lies in its little old town which hugs the river Ljubljanica. Many of the historical buildings are in Baroque or Vienna Succession style which is why Ljubljana resembles Austrian cities like Salzburg rather than those of its Slavic neighbours.

The city is also famous for its bridges. The Triple Bridge is unusual in that it’s like three bridges in one. Originally the two side bridges were added for pedestrians but the entire area is now a pedestrian only zone. This is the most popular thoroughfare in Ljubljana and is a great place to hang out and people watch. 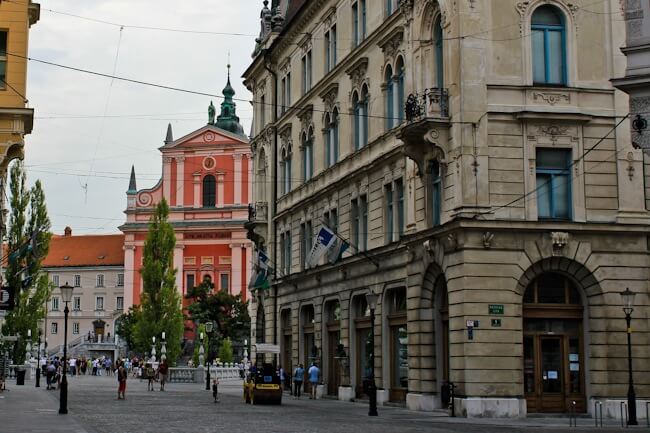 The next bridge along is the Dragon Bridge which was my personal favourite. 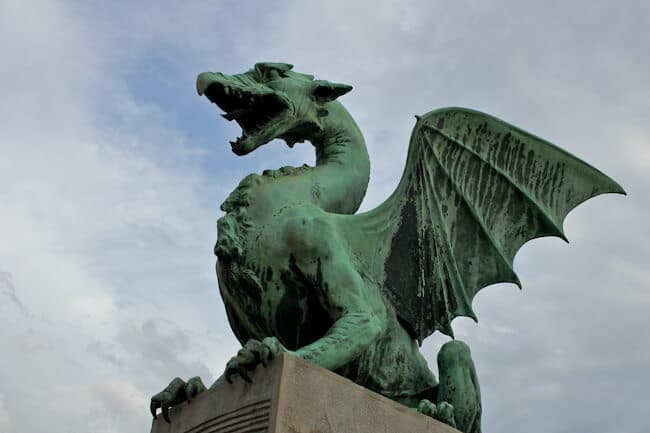 The rest of the city is mostly ugly communist era apartments and offices but I did like the entrance to the Slovenian Parliament, although it’s bordering on creepy.

My favourite photo from Ljubljana was of this lady selling flowers on the main street. She happily agreed to let me take her photo. You can see more of my photos of Ljubljana and the rest of Slovenia on my Facebook page. 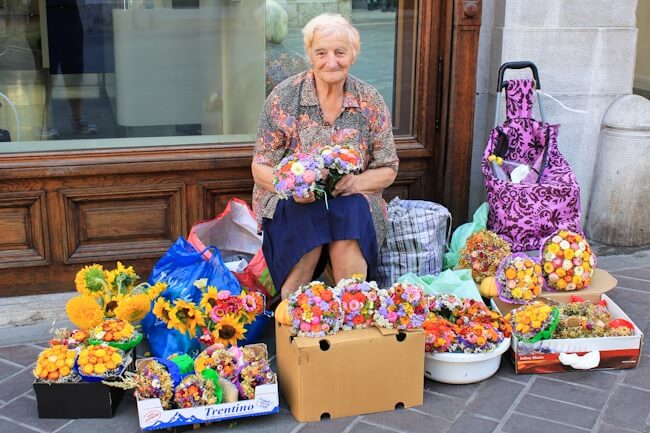 I would have liked to have spent more time in Ljubljana as I wasn’t charmed by the city as much as others but I feel like that was just my mood at the time rather than anything to do with the city itself. I might spend a week there next time I visit Slovenia to get a better feel for the city.

Lake Bled was one of my dream destinations (of which I seem to have a growing number) but I was hugely disappointed on my arrival. I had read about the tranquil lake and the scenic walks you can take but that was all ruined by the international invasion due to the World Rowing Championships. As soon as I realised there was going to be nothing peaceful about this visit, my first instinct was to get out of there but I knew I didn’t have time to go elsewhere so booked an overpriced hotel for 2 days. I then consoled myself with a rather large slice of Lake Bled’s famous cream cake. Life was good once again. 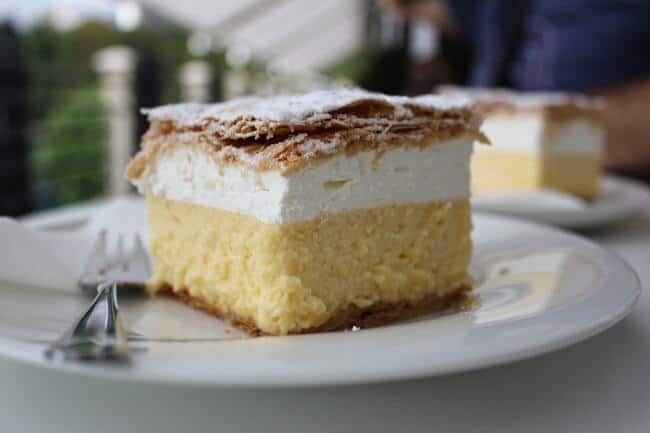 After recovering from the cake, it was time to walk around the lake and get a little closer to the main attractions, Bled Island and Bled Castle.

Upon arriving at Bled Island you’re faced with 99 steep steps which take you up to the baroque Church of the Assumption. The church doesn’t have a wishing well but a wishing bell. My wish for all the other tourists at the lake to disappear did not come true. I should have asked for my money back.

You can get to Bled Island by taking one of the cute little boats known as a pletna. 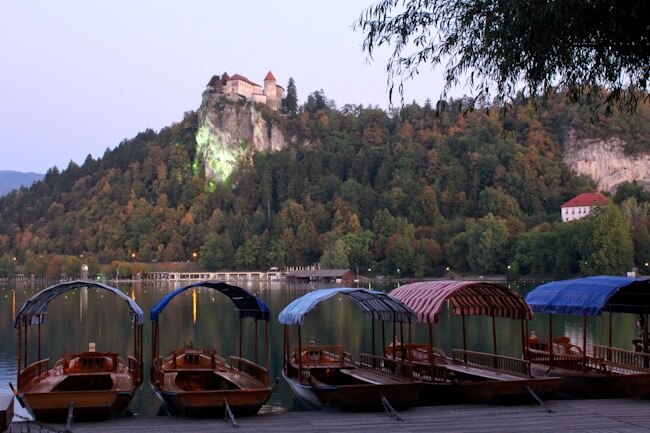 The following morning I finally hit the jackpot and got to see the beautiful, peaceful lake at its best. 6am was the best time to experience the lake with only a few joggers and a couple of crazy swimmers out at that time of day. 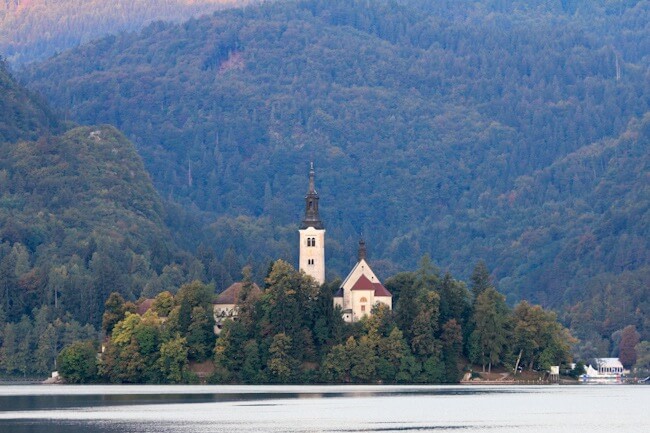 Our hotel was about a two minute walk from the water. Unfortunately I had no idea that was the case and instead of turning right upon exiting the hotel I turned left and half an hour later found myself in the middle of nowhere completely lost. Of course these things always work out for the best and we were able to enjoy a cheap and delicious lunch in what was probably the least touristy restaurant in all of Bled. From there we were pointed in the right direction by some friendly locals and 15 minutes later we were at Bled Castle overlooking the lake. 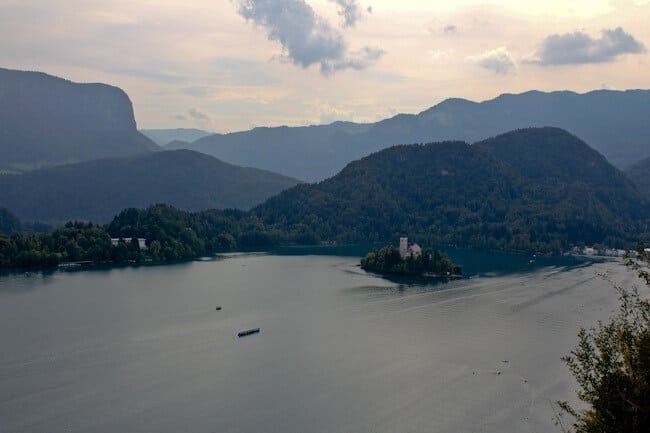 The upper level of the castle is the perfect place to take in the spectacular views of Bled, the Julian Alps and of course the castle itself. 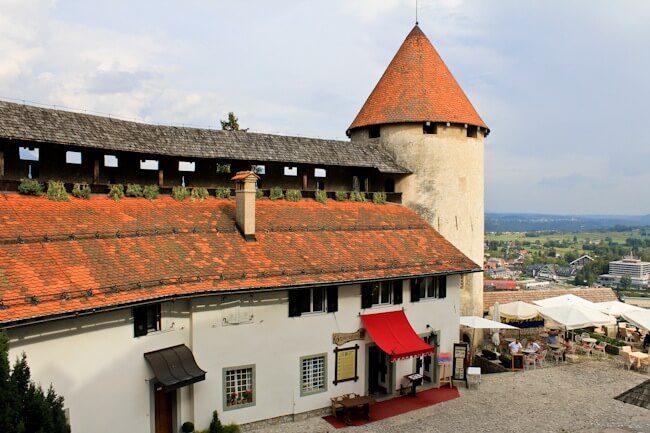 Although I got off to a bit of a rocky start to my visit to Bled, the scenery won me over in the end but the best of Slovenia was yet to come.

Clear blue-green water, rapids, calm pools, high cliffs and waterfalls. That’s what you’ll find at Vintgar Gorge, 15 minutes drive from Lake Bled. I am a city girl and rarely make it out into the country but that might have to change if this is the kind of thing I’ve been missing out on. The 3km round trip through the gorge was the highlight of my trip to Slovenia. 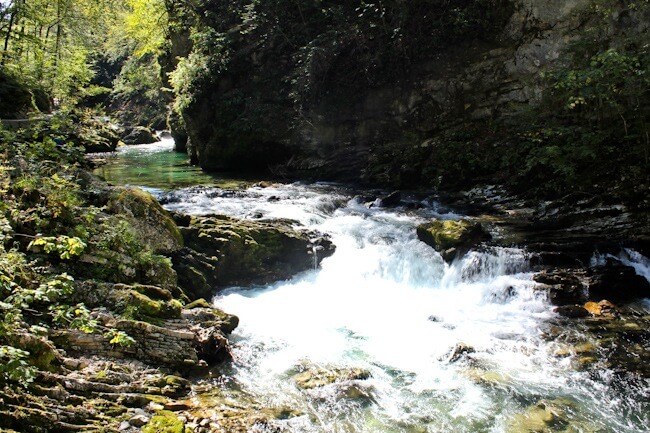 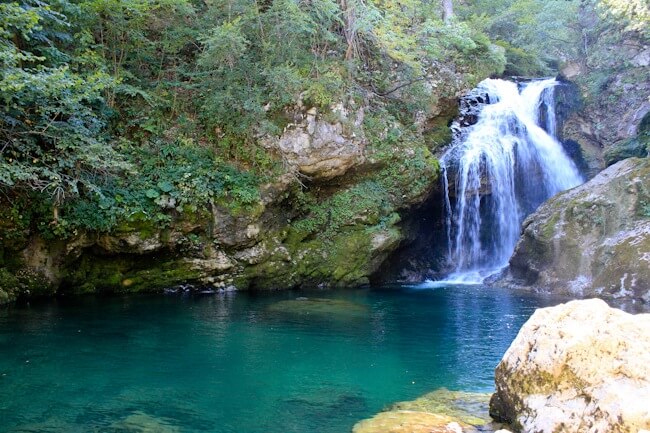 I hadn’t realised that Lake Bohinj was so close to Lake Bled and this would have been a much more relaxing location to base myself for a few days before exploring the region. Arriving first thing in the morning, there was virtually no one else around and this was the serene atmosphere I had been expecting at Lake Bled. I know it’s a cliché but the crystal clear water and snow capped mountains really were breathtaking. I didn’t want to leave. 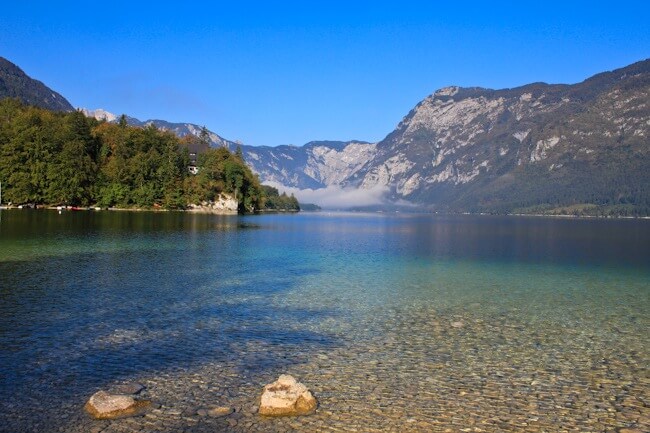 Lake Bohinj is Slovenia’s largest glacial lake and is a popular weekend destination for those wanting to escape the city. You can visit on a day trip from Lake Bled or Ljubljana but I would strongly recommend staying there and enjoying some of the many outdoor activities on offer. Hiking, mountaineering, horseback riding and fishing are amongst the popular activities available in summer while you can go skiing, ice skating or tobogganing in winter. 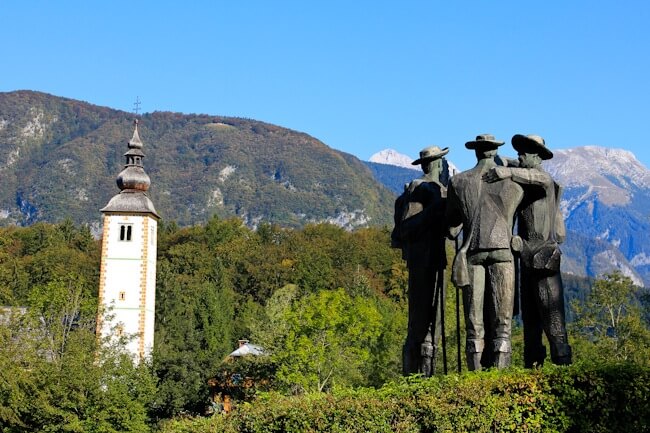 Visiting Savica Waterfall at the end of summer meant only a small portion of the waterfall had water flowing. I wasn’t disappointed though, the fresh air and energetic walk made it a great day out. Savica is only a 10 minute drive from Lake Bohinj so you could easily visit both in the one day as I did but if you have the time and energy you could walk to the waterfall from Bohinj and make a day trip out of it. 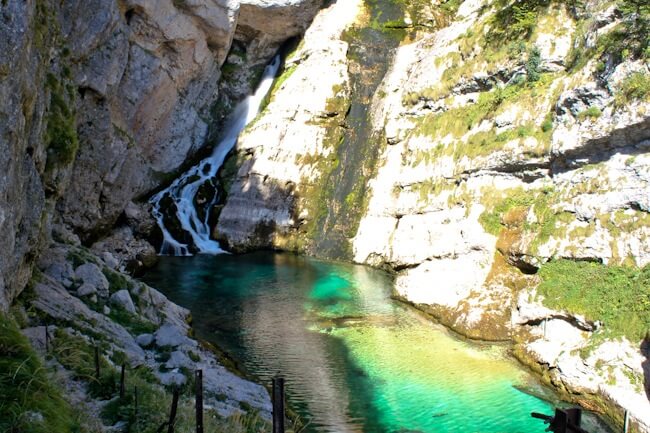 After having fallen in love with the Slovenian countryside at Vintgar, Savica and Bohinj, I couldn’t wait to get to Postojna Cave, an underground world with large stalactites and weird amphibian creatures. My GPS wasn’t cooperating and I didn’t have one of those things known as a map so had to follow the signs along the way. Of course that was doomed to failure and after driving seemingly further and further away from civilisation we had to stop when the brakes on my car started to burn. I was not having any luck with the car but things looked up when a local came over and told us it was very common for the brakes to start to smell when driving down the mountain, especially if you are driving too fast (oops!). He invited us for lunch at his restaurant (which we just happened to stop in front of) and promptly forgot about the caves and enjoyed a yummy Slovenian village meal instead. 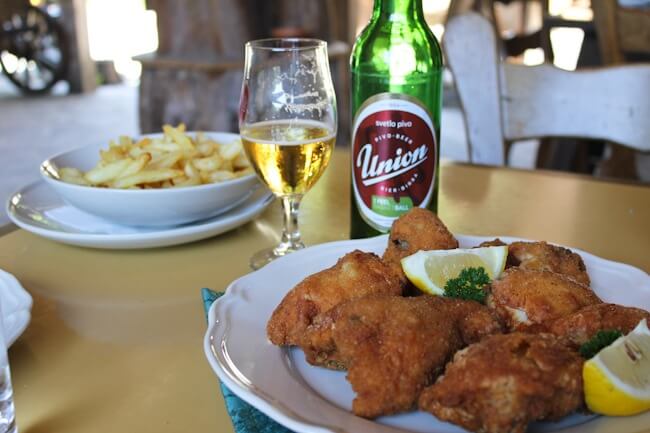 It was only later that I realised Postojna Cave was 100km from where we were and the entire trip was a wild goose chase. Ah, the adventures of travelling without a map/guide book/any clue what you’re doing.

My trip to coastal town Koper was actually a day trip from Trieste. It’s an inexpensive trip and worth it if you are looking for a place to relax for a few hours rather than to go sightseeing as there isn’t much to see around the town. The little cafe at the Loggia is a great place to start before heading down to the waterfront area where you can swim or maybe just sit and read a book. 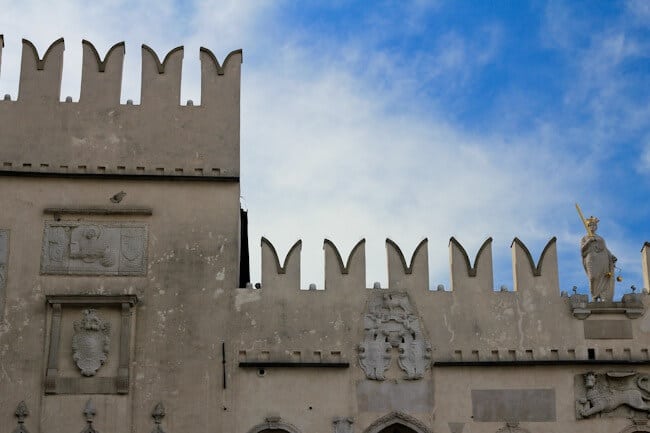 The biggest regret of my trip? Not visiting Piran. Piran was originally high on my list of places to visit in Slovenia after Ljubljana and Lake Bled but after inadvertently being stuck in Trieste for 5 days we were behind schedule so continued on to Croatia instead. I know I will be back in Slovenia and I know visiting Piran will be the top priority on the next trip.

Note: This post was originally published on Destination Europe in October 2011. I have now written about Piran and Maribor.