All I knew about Nuremberg before heading there was that they have one of the most visited Christmas markets in Europe, an interesting World War II history and a world-renowned sausage. That’s probably enough to justify a visit but there’s much more on offer than that.

I usually travel with my husband but while he was off spending time with his family I decided to make a quick city break to Nuremberg. This was my first solo trip for quite some time so to keep busy I got myself a Nuremberg City Card and set about visiting all the cultural sights. The most popular attraction in Nuremberg is the Imperial Castle and this is the perfect place to start a visit to the city as you get a great overview of the city from high up on the hill. 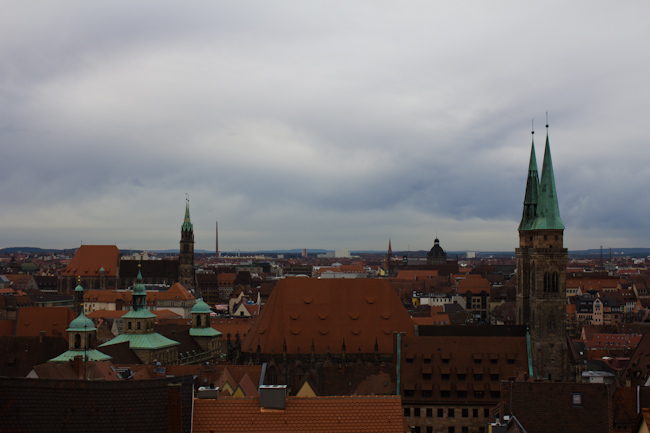 You can visit the castle grounds during the day for free and visit the museum to see the medieval armour and weapons. I would only recommend visiting the castle museum if you are interested in weaponry as there isn’t much else to see. There are guided tours of the castle but they are only available in German. 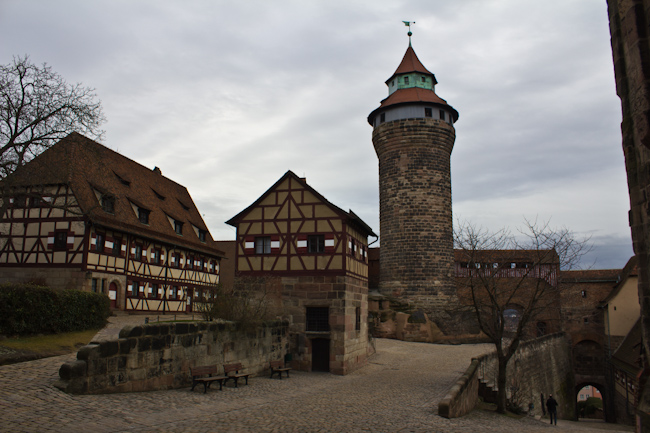 From the castle you can head down to Albrecht Durer’s House. Albrecht Durer was well known around Europe during his lifetime and remains Nuremberg’s most famous artist. His works are on display in many Old Masters galleries around the world. You can visit Durer’s half-timbered house if you’re curious to see how Durer and the upper classes lived in the 16th century. You won’t see any of his famous artwork there though. 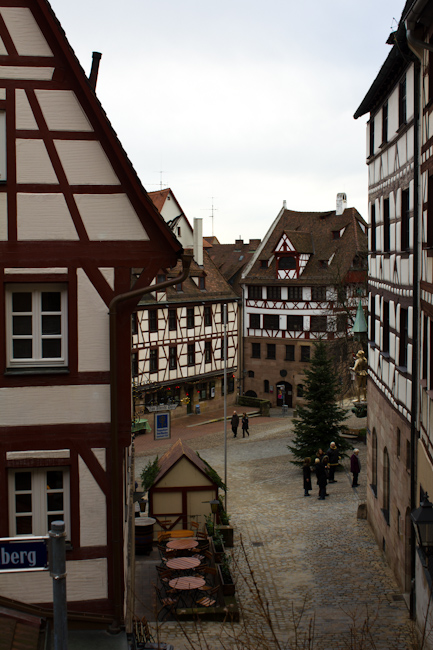 Continuing downhill along Albrecht Durer Street you’ll eventually reach Weissgerbergasse where you’ll find adorable narrow timber-framed houses. This was my favourite part of Nuremberg but I feel a bit sorry for the residents who had to deal with the constant stream of tourists photographing their pretty houses. 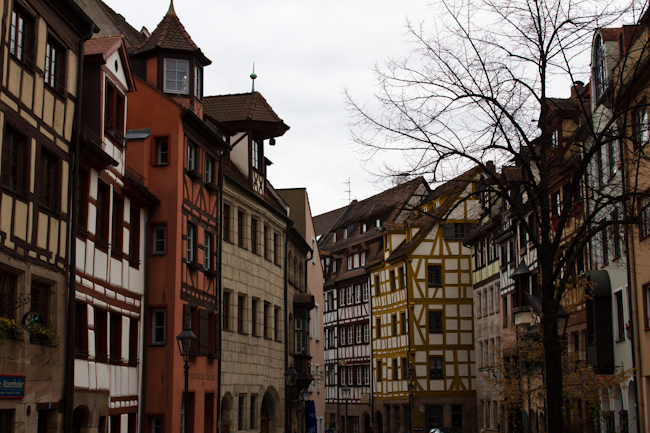 Crossing over the historic chain bridge (which looks remarkably new) you’ll spot the 15th century Wine Store which is now a student residence. I wonder how they feel to be living in one of the city’s most historic buildings. 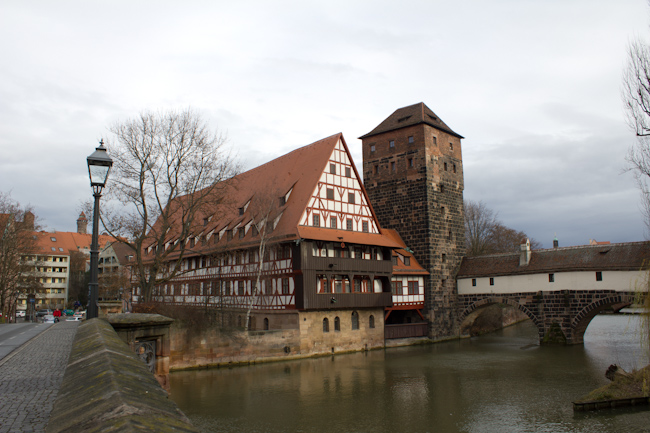 I was half-timber housed out at that point so headed back to the main square (Hauptmarkt) to hang out at the Christmas market. It was there I saw the most impressive sight for me in Nuremberg, the very unusual Beautiful Fountain. I can’t say I’ve ever seen a fountain like it. It was quite spooky looking. 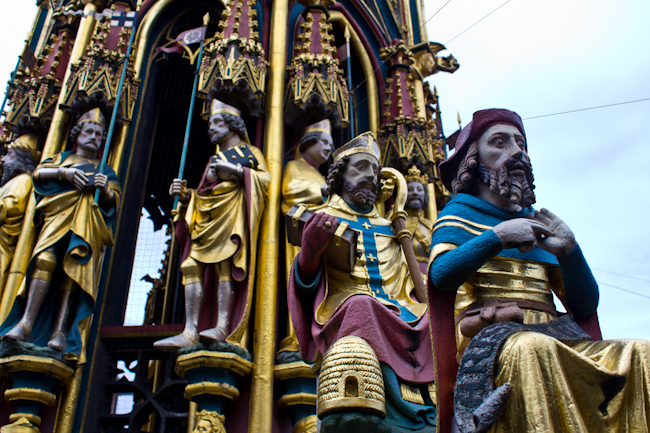 I was hoping to visit the new Nuremberg Trials Memorium and the Nazi Party Rally Grounds but with only one full day in Nuremberg I just didn’t have time. I did manage a quick visit to the Germanisches Nationalmuseum to see some of Albrecht Durer’s paintings. 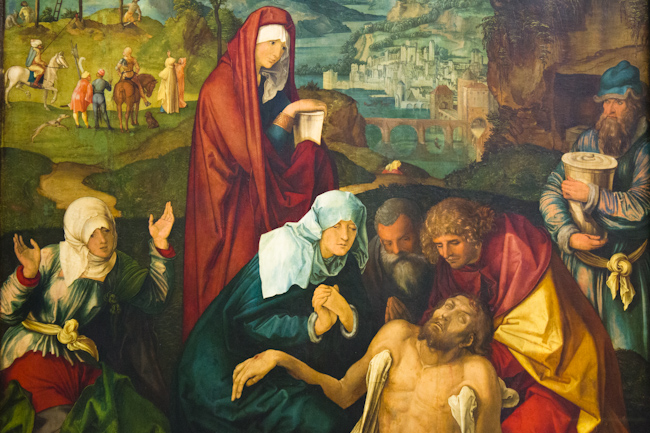 I must admit I’m not very good at the solo eating thing. I don’t mind going to cafes alone, I actually quite enjoy that and I go to the movies alone all the time but there is something about eating solo in restaurants that make me feel uncomfortable. I was lucky that I visited Nuremberg while the Christmas markets were on so for the most part I snacked on street food from the markets and picked up sushi takeaway. This was only a short solo trip so that wasn’t much of a problem but if I was travelling for longer periods I would probably have to get up the courage to eat in a restaurant alone.

On this city break I stayed at the NH Nuremberg City Hotel. This hotel is located across from the train station and is a short walk to the Old Town, perfect for visiting the city’s main sights and the Christmas market. It has everything you’d expect from a 4* hotel but it’s worth staying here for the breakfast alone which is one of the best I’ve had anywhere in Europe.

Even though I was  a little nervous about travelling alone, the people in Nuremberg were particularly warm and friendly and I met a number of people as I wandered around the city. There are many events and festivals on during the year but I think December is a great time to visit as they have one of the most unique and traditional Christmas markets in Europe. 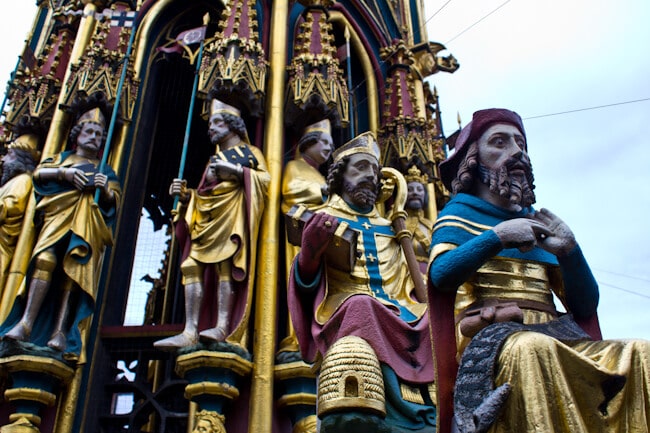