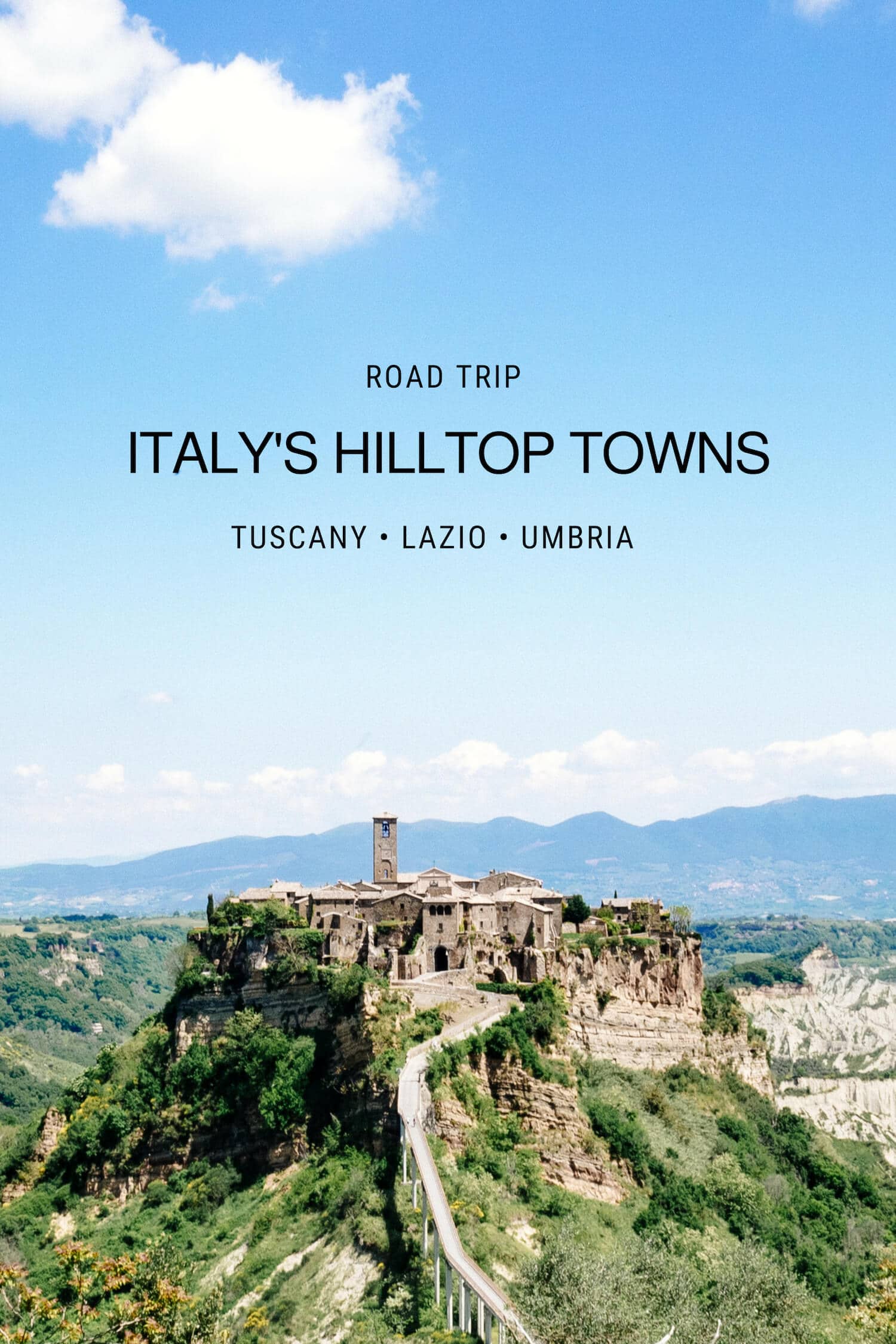 Walking away from Siena’s gorgeous cathedral, with its black and white marble facade set against a cobalt blue sky, I’m excited to be headed somewhere even more impressive. I turn into a narrow side street then walk through a nondescript doorway. The rich, deep colours immediately grab my attention and I know the silky smooth texture is what draws the crowds. Thanks to a tip off from a local, I find myself in gelato heaven at La Vecchia Latteria; my number one reason to visit Siena. Aside from a few short trips I’ve mostly avoided Italy’s most famous region. Tuscany is the Italy so many dream of with its beautiful hilltop towns, gorgeous architecture, rolling hills and of course all that mouthwatering food. It’s what I think of when I dream of Italy too but my aversion to crowds has always held me back. I have avoided Tuscany in lieu of quieter Italian regions Umbria and Puglia or more often, quieter European destinations like Slovenia and Albania.

But seeing as I happened to be driving through Italy in May, a time of the year when there are fewer tourists yet perfect weather, I figured I’d take advantage of the opportunity and take my first road trip through Tuscany. Wanting to get the most out of the trip I stopped at as many towns as possible but it’s an exhausting way to travel. I think it’s best to savour three or four towns and then finish up in Florence, an essential stop on any visit to Tuscany. Bagnoregio and Orvieto are just outside of Tuscany but definitely worth including in this trip.

Walking along the steep concrete path up to Civita de Bagnoregio I was curious as to how it might have looked in the past, hundreds or even thousands of years ago when it was first settled. It’s must have been quite a feat to reach the isolated island-like cliff which juts up sharply from the valley below. But now it’s easy as you can park your car at the base of the bridge and walk directly through the weathered gate and into the village, home to around 12 residents and a clowder of lazy cats. 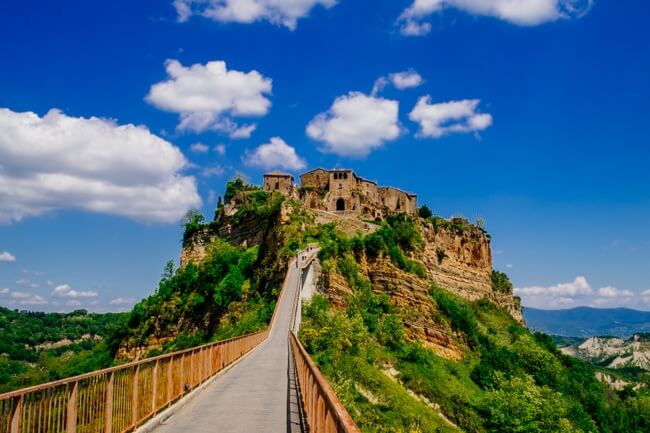 It takes around five minutes to walk from one end of the town to the other, even when stopping to take in the views over the river valley. The restored old town is quaint but there isn’t much to do. The highlight is viewing the town from afar, looking up to the houses teetering on the edge of the cliff, hoping they won’t topple down the valley during the next earthquake. Orvieto is the birthplace of chicken cacciatore and home to one of the most beautiful cathedrals in the world. Unlike Civita de Bagnoregio, once you reach hilltop Pienza you can explore in every direction admiring the crowded palaces and squares as you go. Pienza’s streets are cramped with restaurants and little shops selling some of the most delicious food in Tuscany, especially the pecorino cheese the city is known for. Most of the shops offer tastings which I suggest you take advantage of as the aged cheeses have a completely different flavour to the less mature varieties. Other local specialities include wine (of course), dried herbs, porcini mushrooms and pici pasta served with cacio e pepe. If you don’t want to eat in crowded Pienza, there a number of agriturismo just outside of the city where you can lunch in the Tuscan hills. While one of the best ice creams in Italy is a great reason to visit Siena, it’s not the only one. Siena has long been one of my dream destinations which thankfully lived up to the hype. Siena is much larger than Civita de Bagnoregio and Pienza so there’s plenty to keep you occupied if you plan on staying a few days, even if those things mostly consist of eating and drinking. As always when travelling, I think the best thing to do is wander the back streets until you get lost, eat in a quiet restaurant away from the touristy centre, then make your way back to see the main sights. 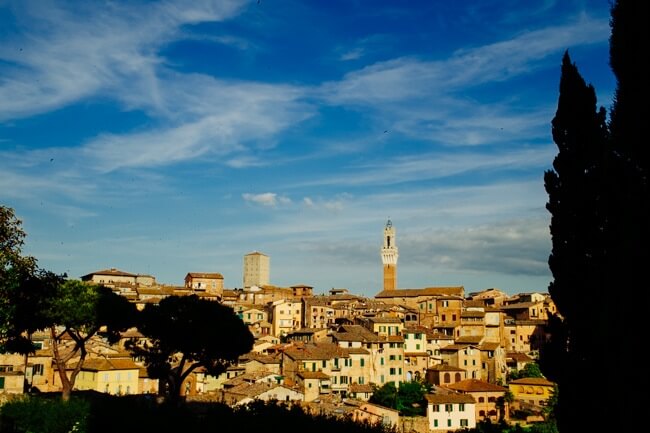 As you explore you won’t be able to miss the Torre del Mangia on Piazza del Campo, the centre and main attraction in Siena. The Palio de Siena horse race is held here twice a year, in July and August. Thousands of spectators descend upon the square for a 90 second race. Sounds like another reason to visit in May and not mid-summer. Along with all the usual delicious Tuscan fare and chianti wine, Siena’s signature dish is pappardelle with wild boar. You’ll find it on just about every menu in Siena. I skipped that but did visit the city’s other major attraction, Siena Cathedral. It reminds me in some ways of the Duomo in Florence but also of Orvieto Cathedral in Umbria. Another day in Tuscany, another hilltop town. San Gimignano was more to my liking as it’s famous for white Vernaccia de San Gimignano wine instead of the red chianti typically found in Tuscany. The hills surrounding San Gimignano are covered with vineyards which produce the delicate, fruity wine, one of my favourite wines in the world. Some shops offer tastings but I suggest trying a glass or three at one of the wine bars around town.

Florence is one huge open air museum. The gorgeous cathedrals, towers, bridges, squares, fountains, statues and atmosphere are free to enjoy as you meander around the city. You can rush around and see the highlights in one day but for first time visitors I think five days is better, giving you time to also check out the city’s world renowned museums and dine on as much Tuscan cuisine as possible. 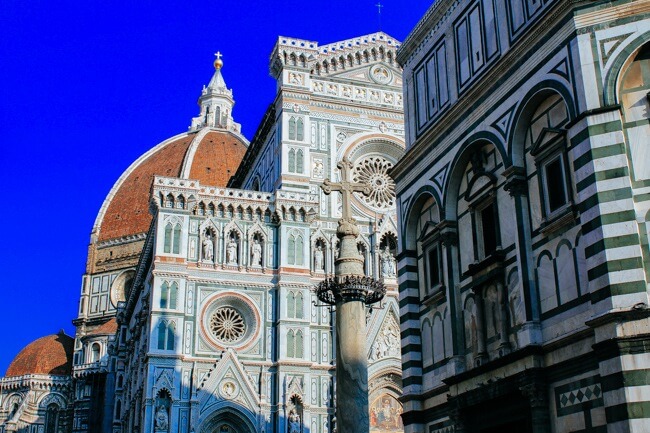 If you have more time, here are some other hilltop towns you might want to add to your road trip itinerary:

While driving from Civita di Bagnoregio to Florence is a great way to see central Italy’s highlights, it might be more relaxing to base yourself in one city for a couple of weeks, taking day trips around the countryside. If that’s you’re preferred way of travel I suggest staying in Siena for its central location and to maximise your foodie options. I recommend staying at NH Excelsior in Siena. Another option is to find a central agriturismo which is an Italian bed and breakfast style accommodation, often situated on a working farm.

This hilltop road trip would also make a great winter road trip, especially if you like to travel off-season and avoid the crowds.

Pin to Your Italy Travel Board