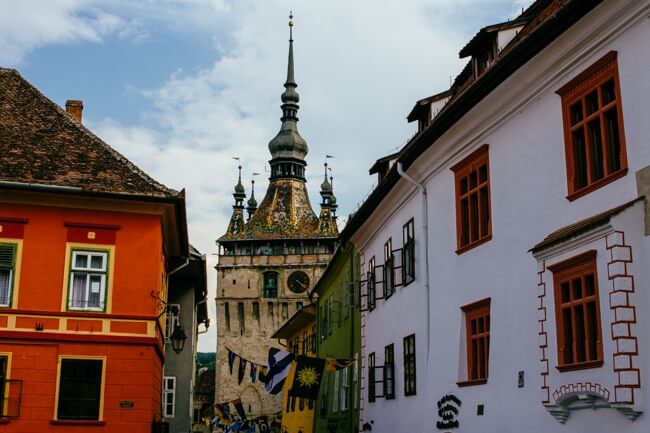 I don’t know why I had such a poor opinion of Romania before visiting. I was expecting it be more like the Balkans and less like Central Europe. I was thinking it would be more than a little rough around the edges but in actual fact the cities are much like elsewhere in Europe with their beautiful historic centres, delicious traditional and modern cuisine plus some very cool castles. 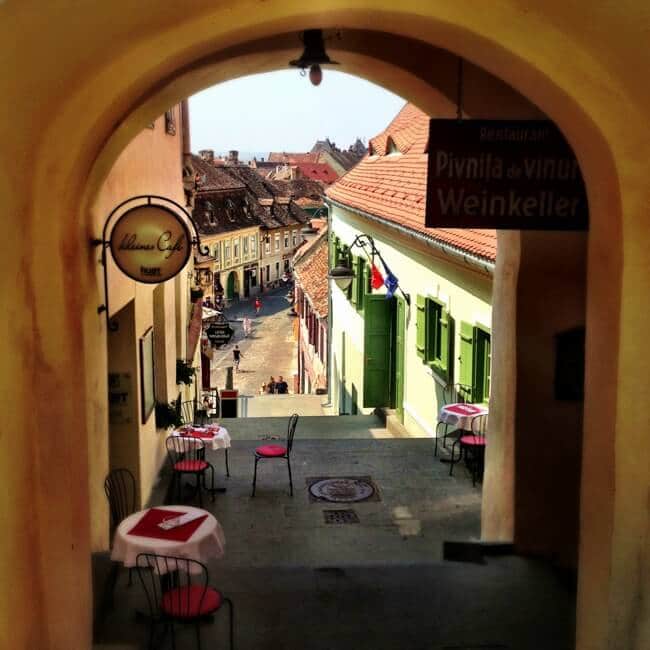 It wasn’t long after moving to Europe that I became ‘castled out’. What was once one of my favourite touristy things to do, visiting castles dropped off my itineraries as they all started to look much the same to my weary tourist eyes.

But after a few years of castle-free travel and hearing Romania has some of the best castles in Europe, visiting Dracula’s Castle, Peles and Corvin Castle headed to the top of my Romania must see list. 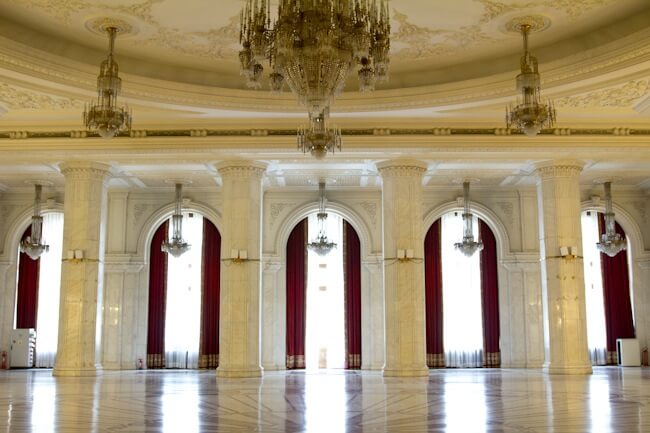 We entered Romania from the north-west via Hungary. It’s a good place to start a road trip through Romania as it takes you to straight to the unique city of Timisoara. Before visiting, my only knowledge of Timisoara was that the 1989 Timisoara uprising led to the Romanian Revolution. Not much to go on for a first time visitor. 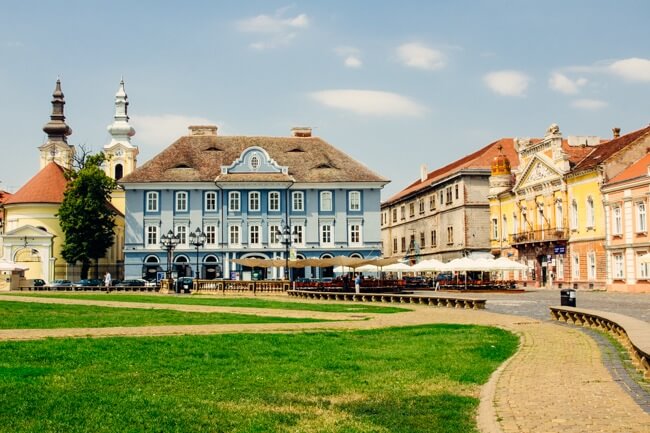 It turns out Timisoara is a city of many squares, parks, churches and the most interesting architecture I’ve seen in Europe. Many of the historic buildings were constructed in Art Nouveau style which explains the quirky, curved lines and in some cases, over-the-top designs. It’s a great city for lovers of architecture. 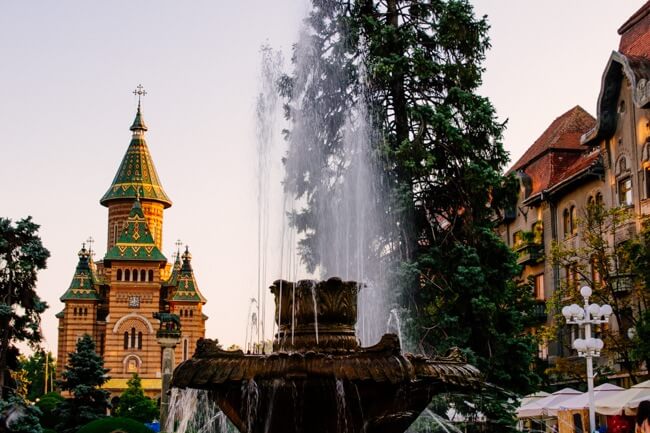 Even though Romania is one of the largest countries in Europe, the most popular tourist destinations are only a short drive from one another. The longest drive of our trip was the two and a half hour drive from Timisoara to Hunedoara in Transylvania. Hunedoara is where you’ll find Corvin Castle or Hunyadi Castle as it’s sometimes known (Castelul Corvinilor in Romanian), an orange roofed, stone castle surrounded by a deep moat and only accessible via a (now permanent) drawbridge. Some say Vlad the Impaler aka Dracula was held prisoner in Corvin Castle in the 15th century. 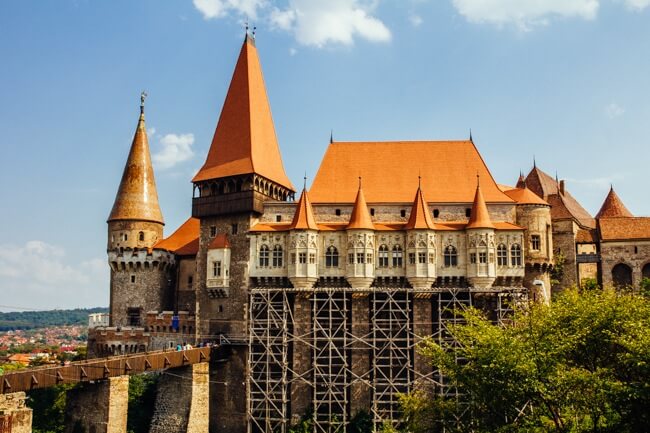 Hunedoara is only worth the detour if you’re interested in the castle. The rest of the city is a bit of a ghost town with boarded up businesses and ghetto suburbs. I spent the night there but never would have had I known what it was like. I’m sure they could do with the tourist dollars created by overnight stays but I recommend visiting on a day trip. 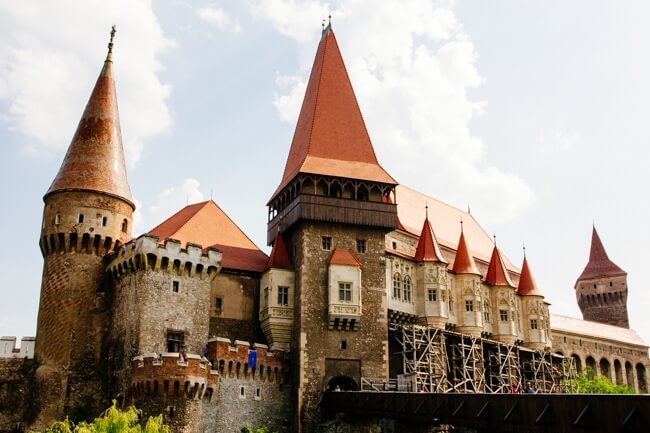 It was when entering Sibiu that I realised Romania is just like anywhere in Western Europe. Sibiu could easily be mistaken for a German city which is not surprising seeing much of it was built by exiled Germans, the Transylvanian Saxons. Life in Sibiu is laid back with plenty of cafés, museums and shopping to keep you busy. It’s the Romanian city most suitable for foodies and its easy going lifestyle and relatively high standard of living make it a popular spot for expats. Add to that the pull of the fastest internet in Europe and I was tempted to stay a while. 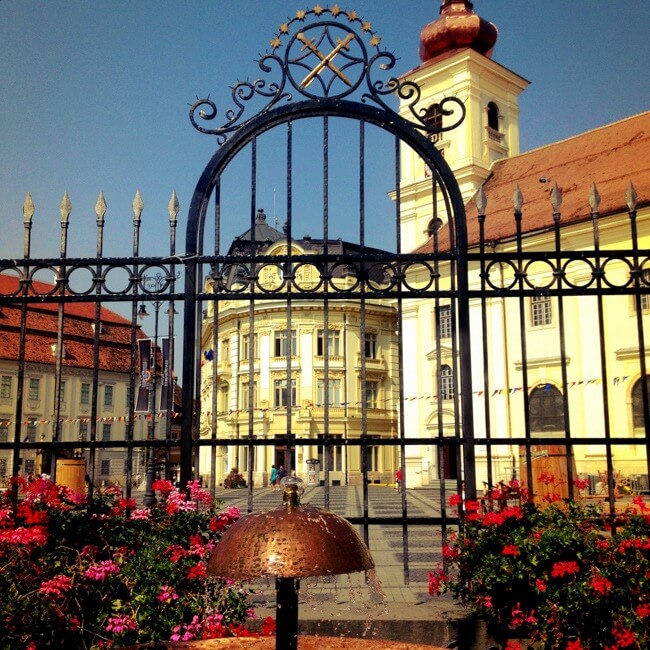 Continuing our road trip through Transylvania, next stop was the very touristy but perfectly restored Sighisoara and its citadel. As with Sibiu, the historic centre was heavily influenced by the Transylvanian Saxons giving it a bit of a German feel. The citadel is quite small so easy to navigate on foot with plenty of places to stop for the local specialities ciorba or sweet papanasi. 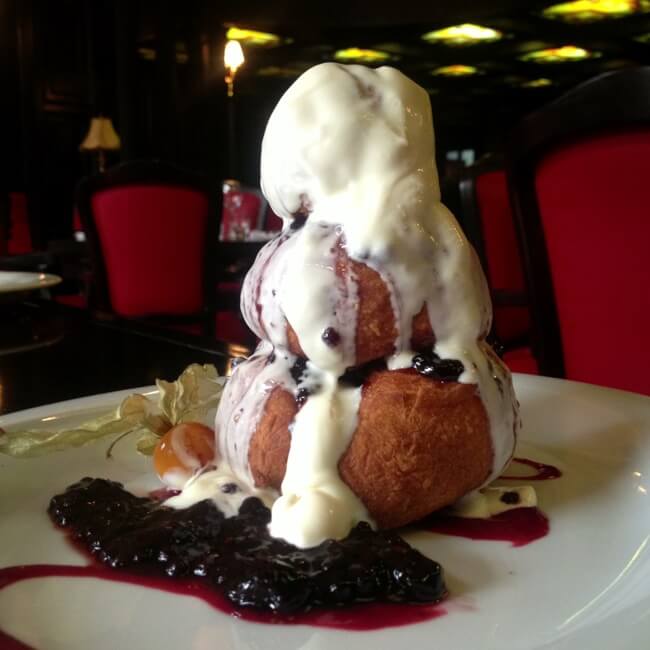 To be seen as a true tourist, have a meal at Casa Dracula, the birthplace of Dracula. To get away from the hordes, climb up the covered wooden staircase to reach the Church on the Hill or to take a quiet walk through the Saxon cemetery. 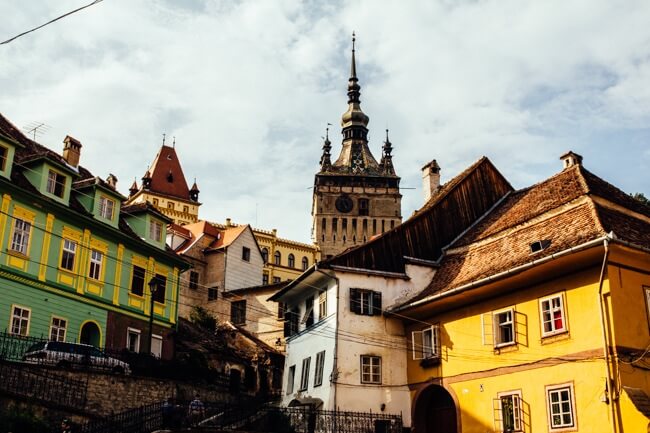 100km south east of Sighisoara is another of Romania’s most popular cities, Brasov. At this stage of our road trip most of the cities we’d come across were relatively small and quiet with tidy streets and low-rise housing. Brasov is quite the opposite. The historic old town was bustling with festivals, cafes and shops which were all crazy busy and the outskirts were full with high-rise apartments as far as the eye could see. Brasov is exactly what I expected a Romanian city to be.

After a quick look at Rasnov Citadel, we followed the tourist buses and made our way to Bran Castle. This is the castle people either claim as Dracula’s Castle or make a point of telling you it’s incorrect to call it Dracula’s Castle. Either way, Bran Castle is the most visited castle in Romania and it’s definitely worth a look. I loved my visit to Bran Castle for the delicious locally picked berries I bought at the front gate. 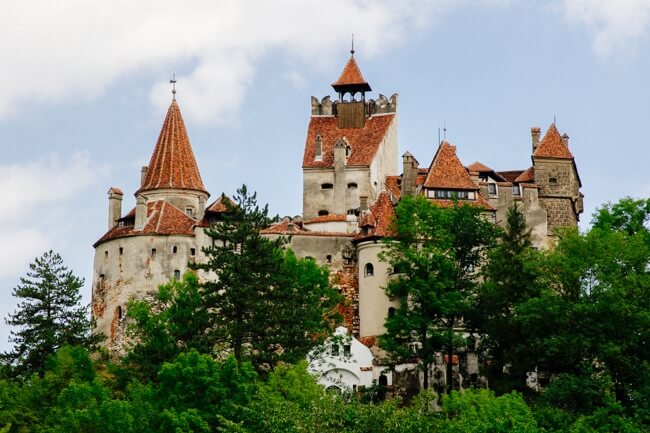 Without a working GPS or map, finding Peles Castle was a bit of a nightmare. The handful of people I asked for directions had no idea how to find it and some had never even heard of it. But after a 20 minute walk through the forest one of the most gorgeous castles I’ve ever seen came into view. Peles is the most fairytale-like of all the castles in Romania and its Neo-Rennaissance timber framed style is quite unique. 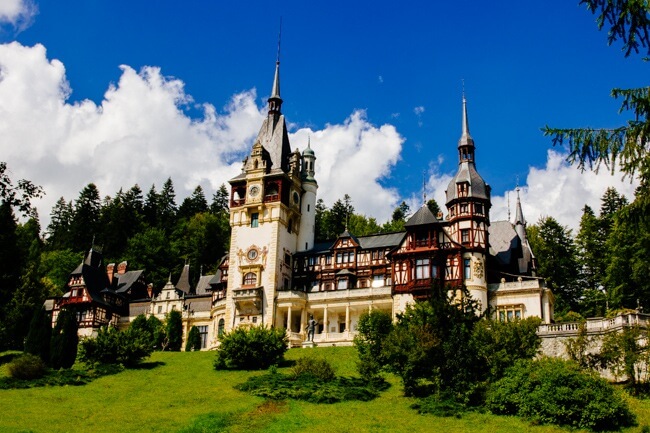 The Carpathian Mountains make a beautiful backdrop to the castle which was built as a summer palace for the royal family. Even though I didn’t have the chance to go inside I’d include Peles in my top 10 castles in Europe. 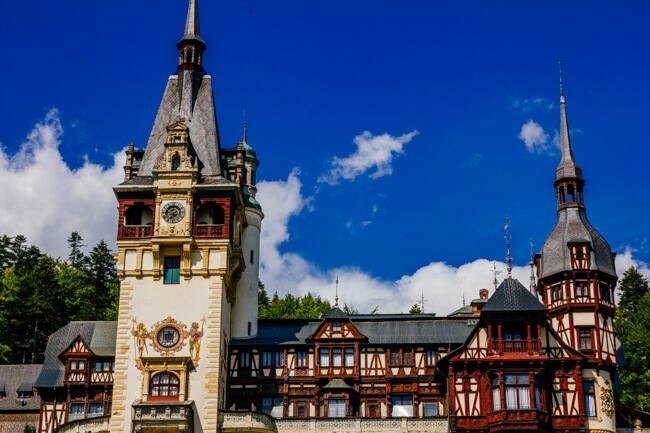 Our Romanian road trip came to an end in the nation’s capital. Aside from the astonishing Palace of the Parliament, there’s little of interest to me in Bucharest. It’s just another big city. Others rate it highly but if I was to return to Romania I’d skip Bucharest and spend most of my time in Timisoara or Sibiu instead.