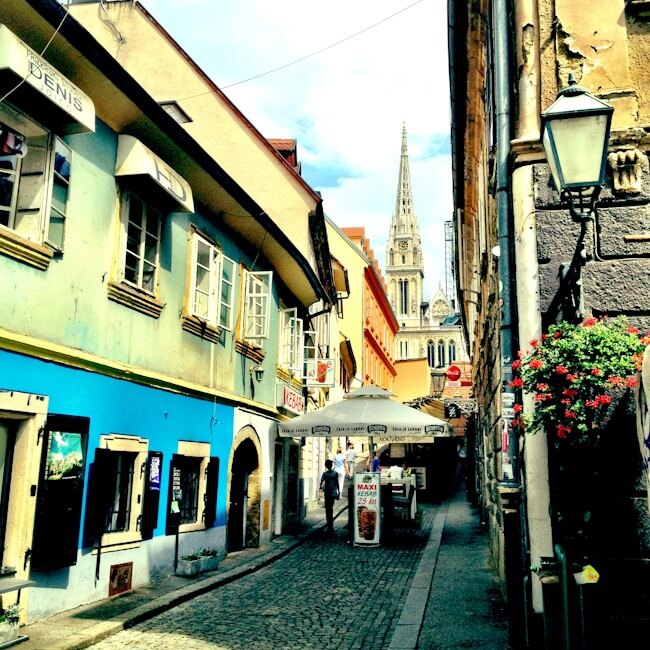 It was hard to drive away from Zagreb, a colourful, dynamic city where much of the day is whiled away in sidewalk cafes. A city where I can envisage myself becoming a resident. But I had more pressing issues, a road trip through Bosnia and Herzegovina and a long awaited return to Mostar.

I’m still wondering if my GPS didn’t fail me on this trip. The TomTom isn’t particularly useful in the lesser visited parts of the Balkans where coverage is either limited to a few main streets, totally inaccurate or doesn’t exist at all. The Bosnian border should only be an hour or so from Zagreb but it took us more than two hours to arrive. Although the standard of the road dropped with each kilometre closer to the border, there were no real problems with the road to explain our delay.

The border crossing was quick once I realised we didn’t have to wait behind the unmoving queue of trucks. Passports, car registration and insurance documents were all requested and after fielding a number of inane questions from a grumpy customs officer we crossed without incident. It was then like we had entered into another world.

Driving through the autonomous region of Republika Srpska felt like driving through a ghost town. Abandoned and burnt out buildings appeared around every turn. The Serb region didn’t fare well during or after the war and the rural region is clearly one of the poorest parts of Bosnia and Herzegovina. 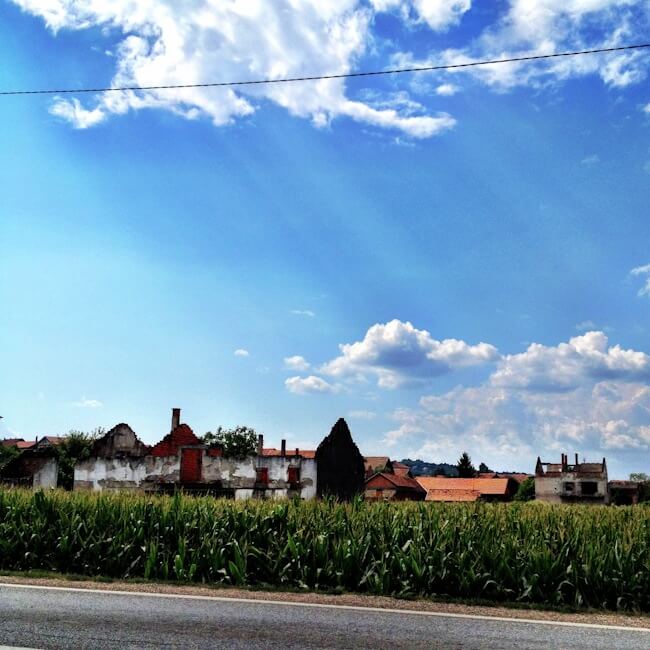 The Serb flag was flying strong in the now peaceful countryside but I couldn’t help wondering if it will remain that way. 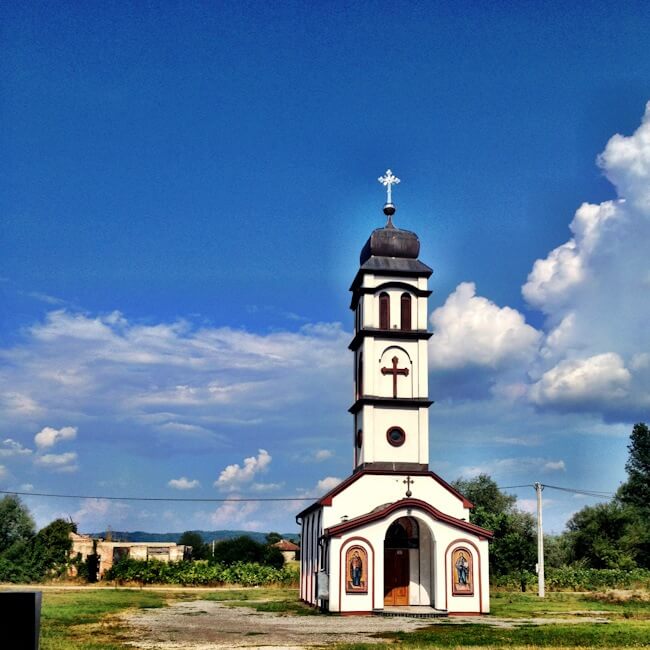 Noticeably more prosperous than the countryside, Banja Luka is the growing capital of Republika Srpska. It played an important role during the Bosnian War with Serbs from Croatia and Bosnia taking refuge in the city and Croats and Bosniaks being held in the nearby Manjaca concentration camp. A consequence of the war is that there are now 15 women for every man in Banja Luka.

There is a lot of history in Banja Luka but on the surface you have tree-lined boulevards, a medieval fortress in the city centre and popular thermal springs. Regrettably we only did a drive-by at Banja Luka but I will definitely return to see more.

Stepping off the tram in the heart of Old Town it was hard to believe I was in a city formerly occupied by the Austro-Hungarian empire. This part of Sarajevo well and truly retains its Ottoman style with a number of mosques, Turkish baths and shopping bazaars. 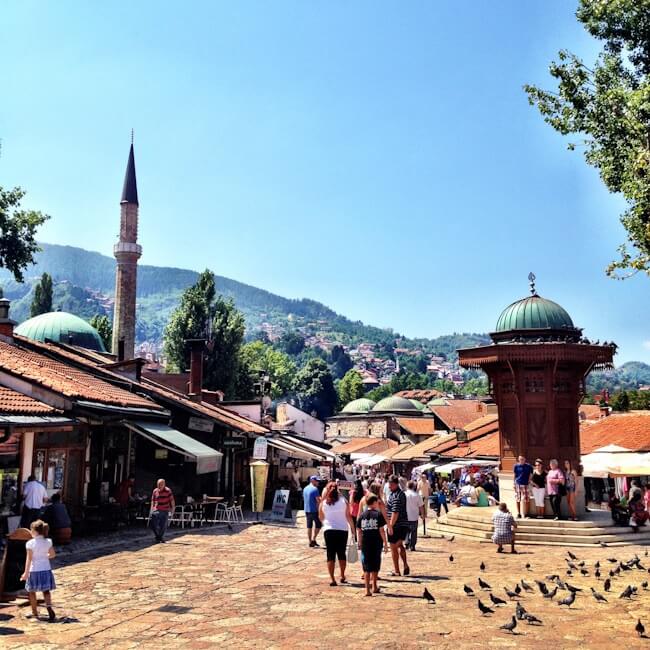 What makes Sarajevo unique is that you can spend hours exploring the Turkish influenced city and then head in another direction and find yourself surrounded by architecture more like what you’d find in Budapest. Keep going and you’ll be reminded of its communist past. Turn another corner and you’ll be face to face with a synagogue. No other city in Europe has such a harmonious mix of styles, cultures and religions. 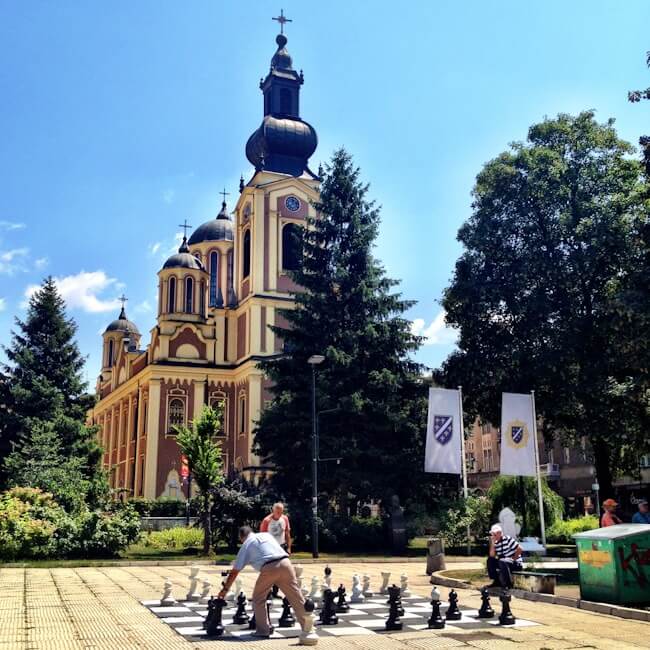 History is inescapable in Sarajevo. The pretty hills which surround the city were home to 13,000 soldiers from the Army of Republika Srpska during the Siege of Sarajevo from 1992 to 1996. They managed to pick off more than 10,000 civilians during the siege, many of whom are buried in war cemeteries just up the hill from the city centre, most of them young men in their 20s. 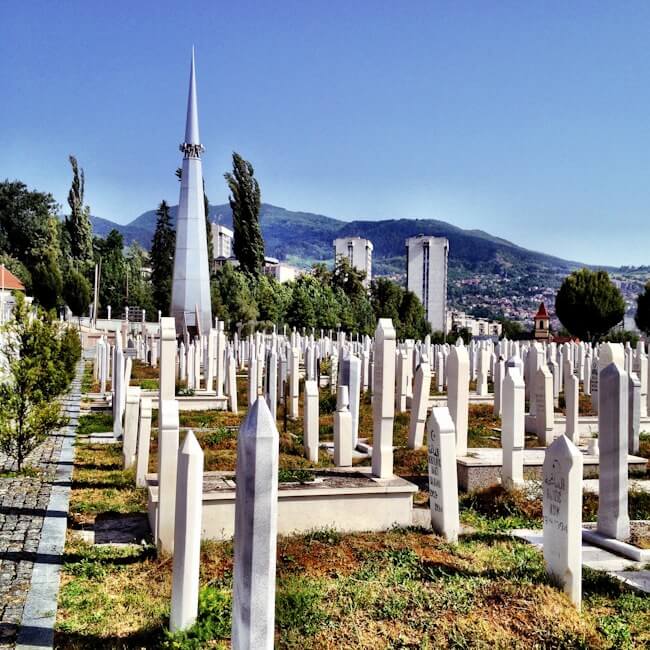 The war history goes back much further than that with the assassination of Archduke of the Austro-Hungarian empire Franz Ferdinand at the Latin Bridge in 1914. This was one of the factors leading to the outbreak of World War I not long after. 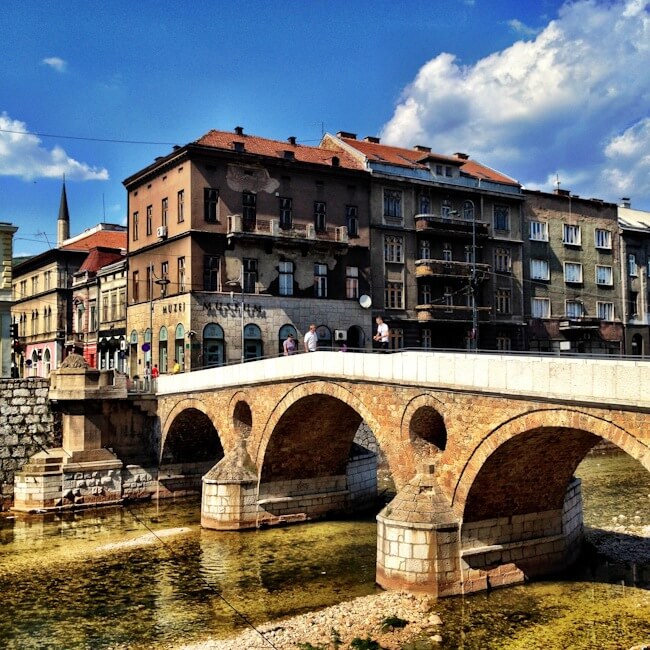 Look hard enough and you’ll find almost every major cuisine in Sarajevo but why bother when you can find the cheap but very tasty local specialties cevapi and burek on every corner. 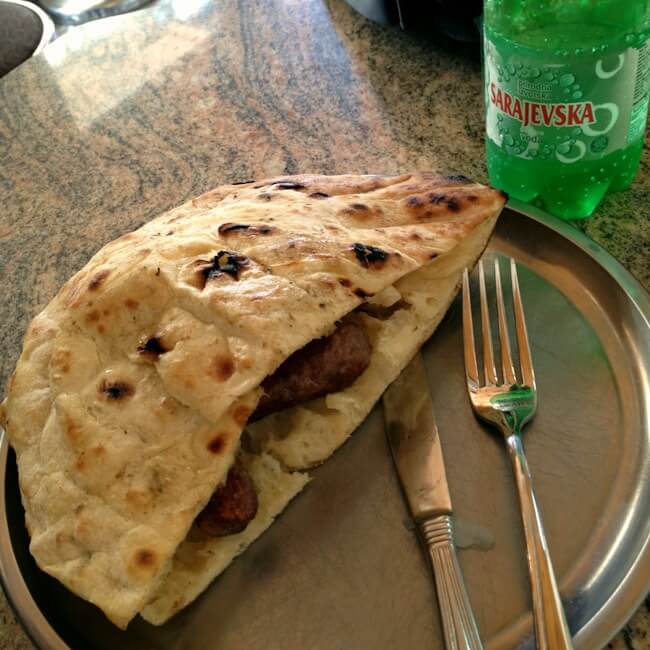 We stayed at the very peaceful boutique Hotel Merona. It’s way out of the city centre but it’s such a wonderful, relaxing place I can’t recommend it highly enough. Huge rooms, comfy beds, a sauna and truly helpful staff. There is free parking at the door and if you don’t want to drive into the old town you can catch a tram that passes by every few minutes.

Technically this was not my first time to Mostar. A couple of years ago I took a bus there only to discover on my arrival that the last bus back to Dubrovnik was leaving a half hour later. Peak season ended the day before and the bus schedule had changed. My options were limited. Spend the night in Mostar without any of my belongings and return to Dubrovnik past my hotel check-out time or take the bus straight back without even seeing the famous Old Bridge. I chose the latter and was bitterly disappointed.

This time was a different story. I had plenty of time to walk the historic stone laneways and to admire the bridge from every angle. 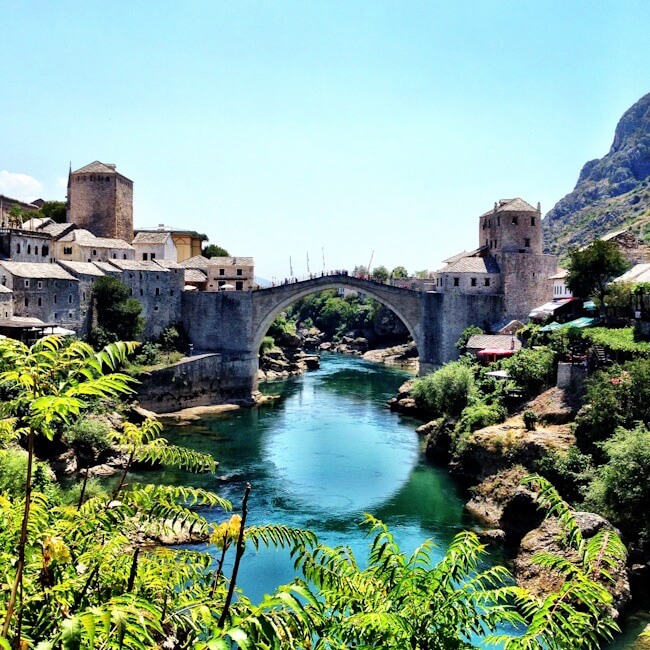 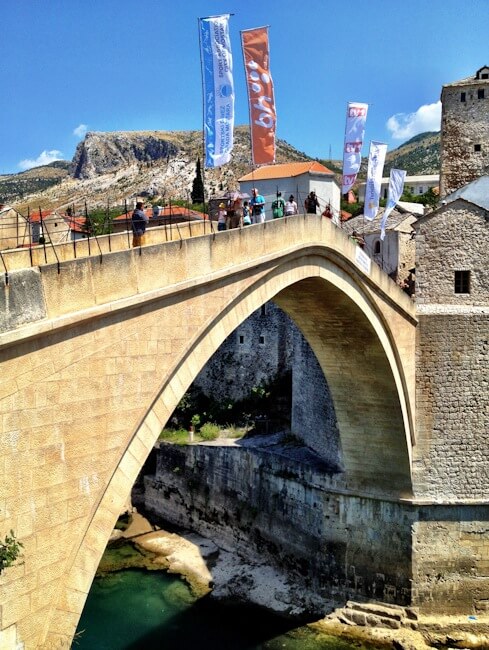 Unfortunately we didn’t get to see one of the famous bridge jumps. I’m not sure if it’s something they do every day or just every now and then but I didn’t see any signs of anyone looking to dive off the bridge into the bright green waters below. 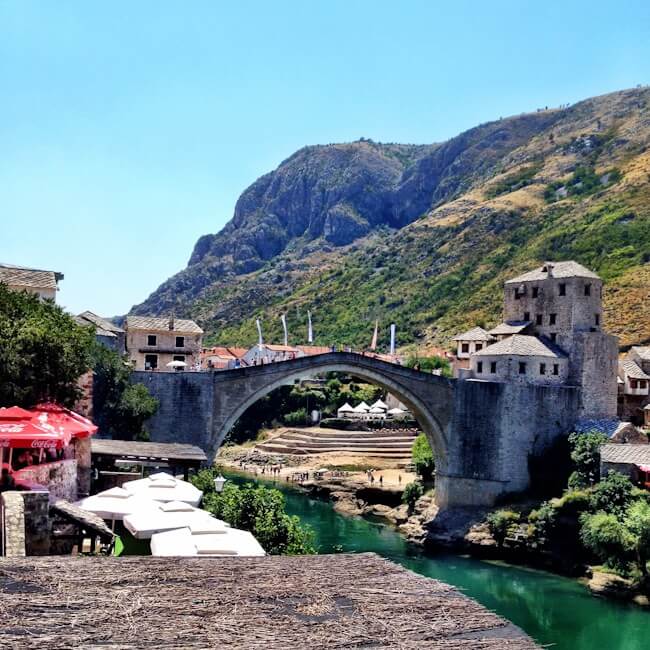 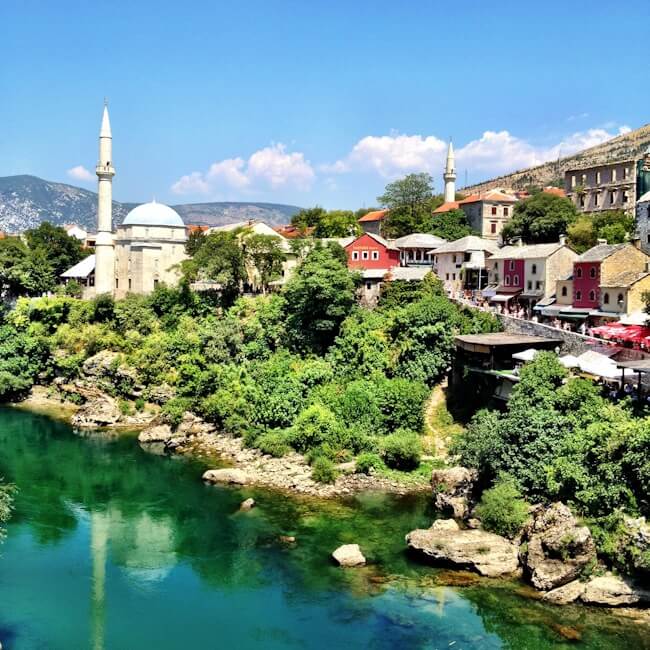 What you can’t miss as you walk around the town is the destruction from the Bosnian War. Bullet holes everywhere. Burnt out homes. Buildings in disrepair. It’s a constant reminder of the violence and carnage that took place only 18 years ago with around 100,000 killed, the majority being Bosniaks. 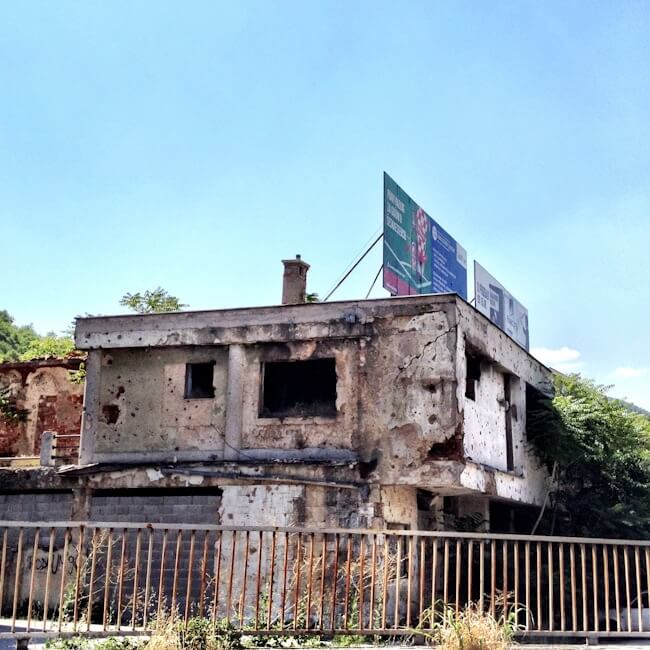 This video shows fascinating footage from the war and the destruction of the Old Bridge in Mostar.

Much has changed since the war of course. It’s now a bustling city full of cafes, shops and tourists. 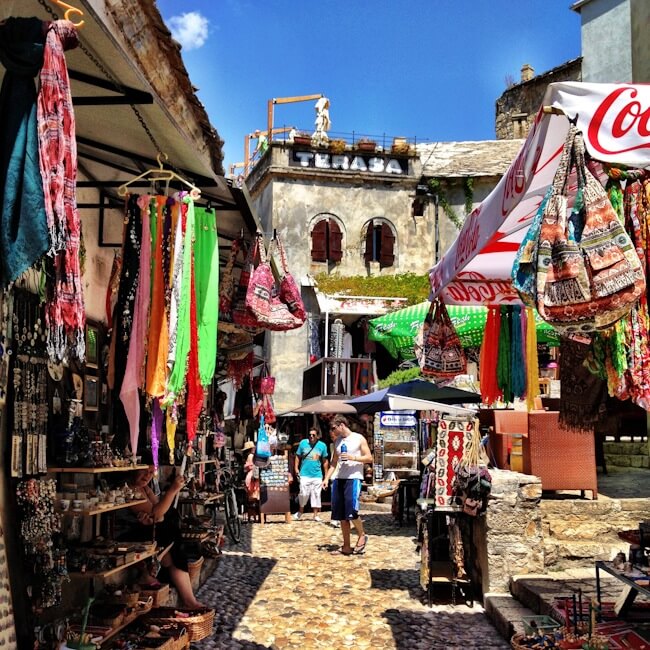 Major roads around the country are lined with flags so can’t mistake which ethnic region you are in. You can see the Serb flag flying in Republika Srpska, in Sarajevo you mostly see the blue and yellow Bosnian flag and in the south the Croatian flag is everywhere. It’s in the southern region where you’ll come across some of the most striking scenery in Bosnia and Herzegovina. 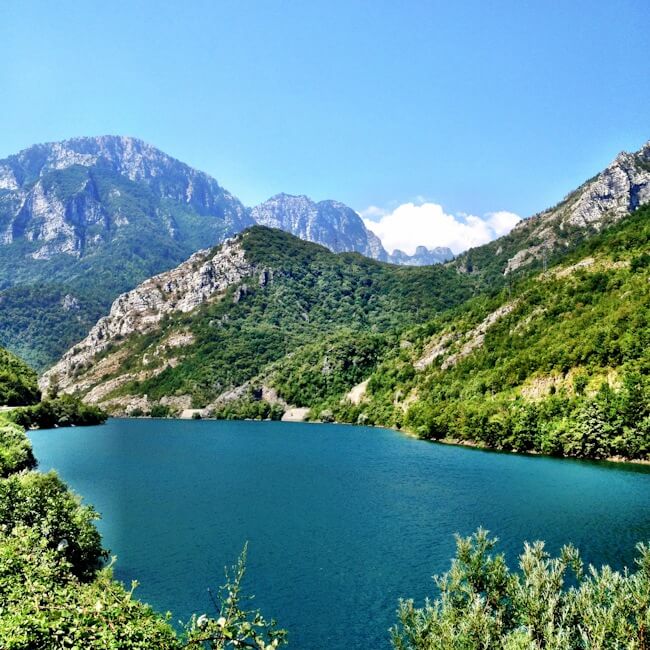 Dubrovnik is a three hour drive from Mostar but at the end of the long journey you’ll be rewarded with a view of one of the most photogenic towns on the Adriatic. 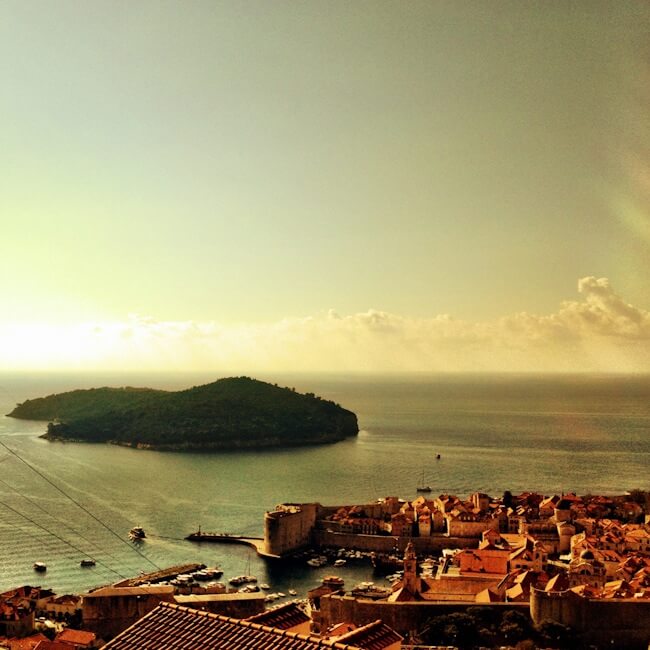 Driving in Bosnia and Herzegovina

The roads connecting the main cities are generally in good condition although they can be narrow at times. The biggest issues when driving in Bosnia and Herzegovina are crazy drivers who don’t hesitate to overtake on blind corners and the lack of GPS coverage. Don’t head off-road at all as there are millions of unexploded landmines around the country, especially in the rural border regions. This is a fascinating country and driving is the easiest way to get around to experience its culture, history and natural beauty.