Awoken by gunshots I wondered what I had gotten myself in for. I knew virtually nothing about Albania and the government travel advisory warned against visiting. My mind was on the civil unrest a few years earlier which resulted in the deaths of thousands. Was I about to find myself in a deadly situation?

To my relief, there was not fighting in the streets. To my surprise, the regular night time shooting was aimed at wild dogs which had a bounty on their heads. Ten years later the shooting has stopped but the dogs still roam in packs.

Even though I was in Albania last year, it has been more than 10 years since I was last in historic Berat. It has been interesting to see how much the city has changed or maybe I should say how little it has changed. The roads haven’t been touched, potholes still abound. Footpaths are to be taken at your own risk. Public services are neglected. The people are still struggling to make ends meet.

At least Mangalem, Berat’s UNESCO World Heritage listed old town, is starting to get a face lift. A number of the Ottoman style hillside homes have been restored to their former glory as either private homes or hotels and restaurants. Skilled craftsmen take 8 hours to create one square metre of the typical timber ceilings you find in these buildings making the restoration a very slow process but a worthy one. 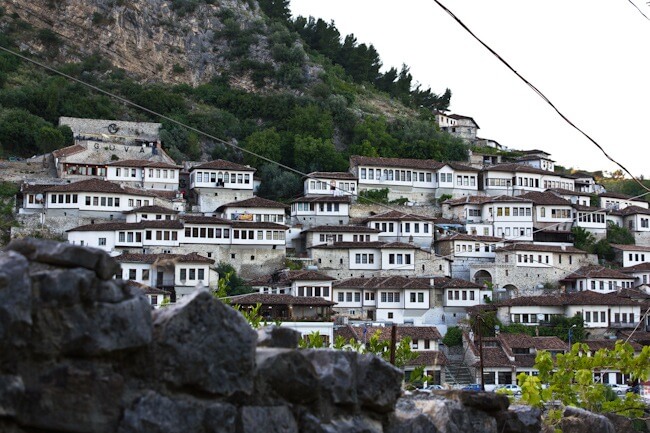 The most visible changes to the bustling city are the new Orthodox church built on the site of a former church which was pulled down by the communists and the new University of Berat which will hopefully inject a younger demographic to the city. 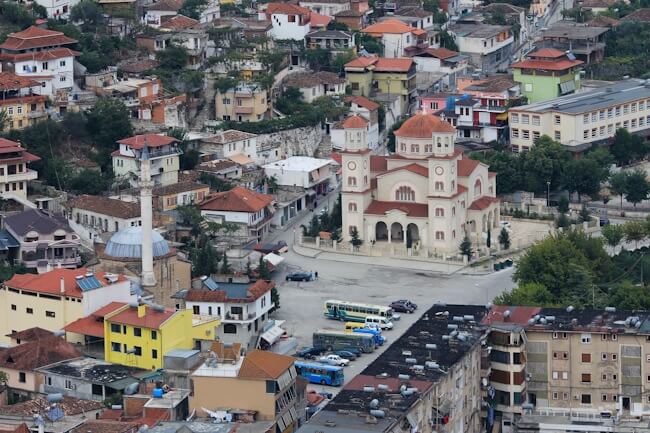 The ongoing financial crisis in Greece and the rest of Europe has seen many expat Albanians return to their homeland but the job prospects in Albania are virtually nonexistent. Even if you manage to find a job the financial rewards are heartbreakingly low. Not being a particularly safe city (or so the locals tell me) each night we left our car in a car park with 24-hour surveillance. That surveillance was mostly carried out by a 60-something man, working from 6pm to 8am seven days per week for the grand sum of 100 euros per month. People like him watched their quality of life suffer with the fall of communism while others benefited enormously. 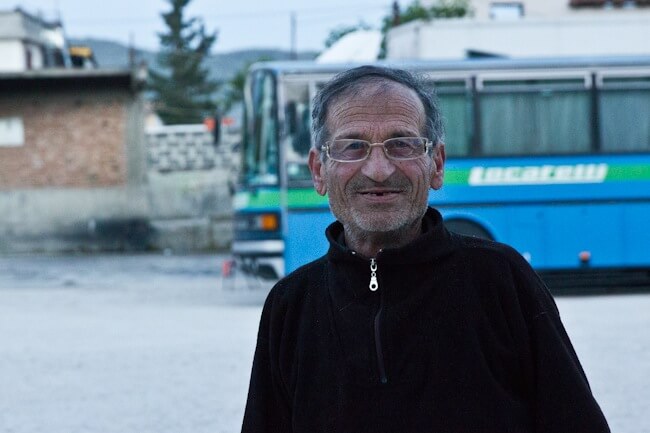 Of course one of the biggest contributors to Albania’s poverty is corruption. Political leaders, judges, doctors, teachers… You’d be lucky to find someone who isn’t corrupt. Even the anti-corruption organisations are corrupt. When visiting Berat to investigate corruption in the local hospital, the government group assigned to the task spent a couple of nights in one of the local hotels. On their departure, they asked the owner to forge the receipt, claiming they paid 40 euros per night instead of 20 so they could get reimbursed the higher amount.

I already knew corruption in hospitals was a huge problem as if you don’t tip the doctor he won’t treat you but I was surprised to learn many teachers are also corrupt. The teachers avoid actually teaching anything during class time to force the parents to pay them for private lessons on the side.

My favourite though was when trying to buy travel insurance for my mother-in-law who was going back to France with us. With the recent liberalisation of the visa process for Albanians, a visa is no longer required for the Schengen Zone. All that’s needed is travel insurance and a return ticket. When purchasing travel insurance we were quoted prices ranging from €4 to €30 for 3 months. That’s super cheap for 3 months coverage. Finally I asked what exactly you get for that and the answer was nothing. It’s fake insurance which you just show at the border, it doesn’t cover you for anything. So we got the fake insurance and a fake return ticket for good measure.

The xhiro in Albania is alive and well. Every evening in the summer, Berat’s residents take to the pedestrian strip, walk to the end of the road and then turn around and walk back. The is repeated for an hour or so while they chat with their friends, gossip with neighbours and admire potential partners (albeit discreetly). While in theory you can meet someone like this or at school or work, many Albanians still have arranged marriages, preferring to find a partner based on class, family background or whether or not they work abroad. 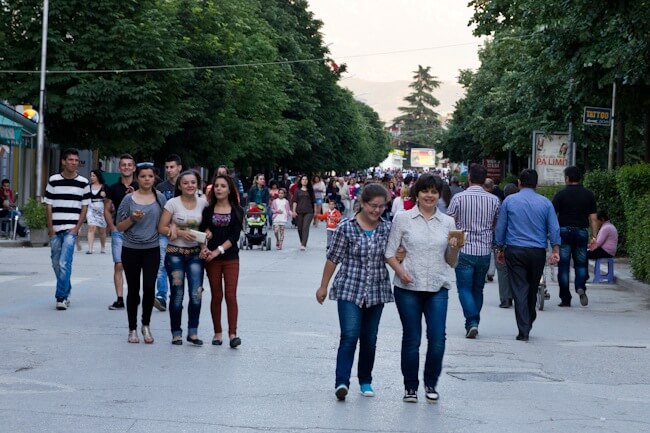 One of the great things about travelling is seeing new things and learning about new cultures and customs. But there are some things which are so different that you can’t help but laugh. Cows and chickens walking along the motorway. The infamous bunkers dotted around the country. Rubbish collection done by horse and cart. Or someone deciding to tie up their horse by the street in the middle of the city, as you do. 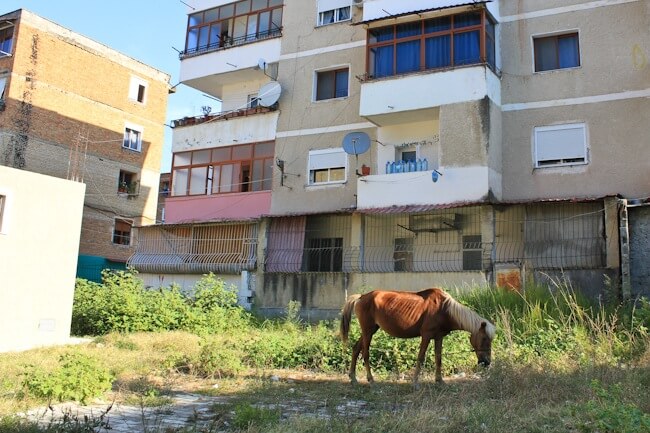 Or someone using the river as their own private farm. 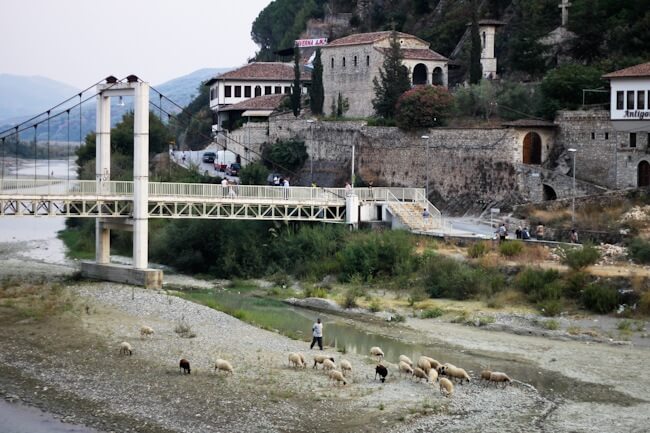 As well as being known as the ‘town with a thousand windows’ due to the pretty Ottoman style buildings in both Mangalem and Gorica (the Orthodox areas of the city), Berat’s other famous attraction is the kalaja, the castle which overlooks the city. The local government recently received €1.5 million from the EU to upgrade and restore the castle. Work was due to start in June 2011 but one of the local residents told me nothing has been done to the castle in years and the previous two years in particular has seen a rapid decline in the area including collapsing buildings and rubbish everywhere. Hopefully that money hasn’t ‘disappeared’ and the work has just been delayed. 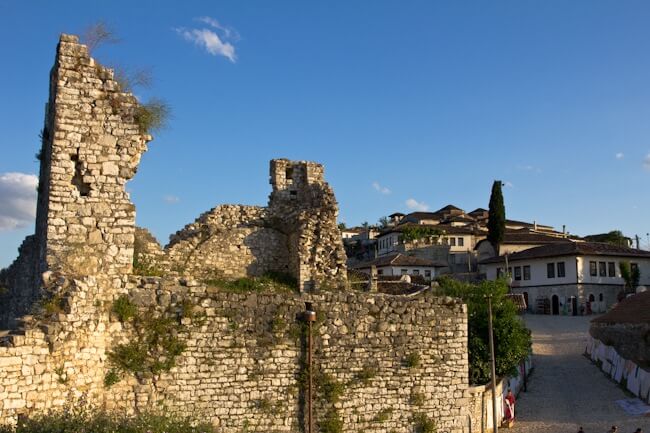 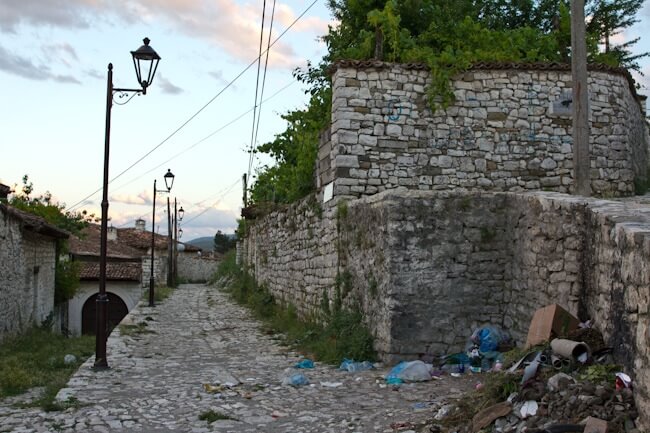 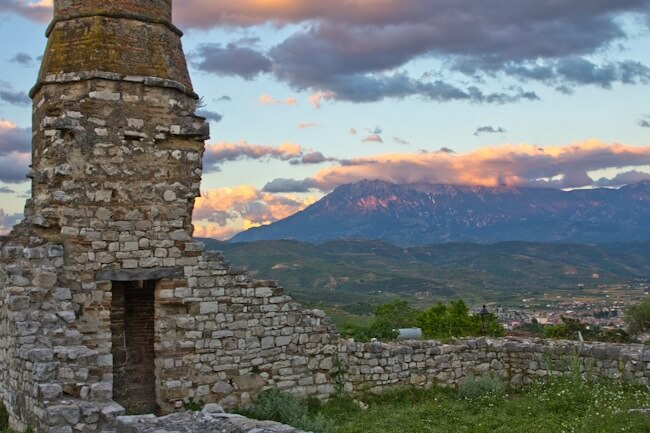 Where to Eat in Berat

I think I’ve tried every restaurant in Berat. They all have what I call the ‘Balkan menu’ which consists of pizza, pasta, salad, grilled vegetables, whole grilled fish and meat which has had every drop of moisture cooked out of it. Finally an authentic Albanian restaurant opened up just near the entrance to the castle. Taverna Lazaro has the tastiest Albanian food I have had anywhere in the country. Qofte (meatballs), tave kosi (lamb baked in yogurt) and stuffed eggplant and just some of the delicious dishes on the menu. 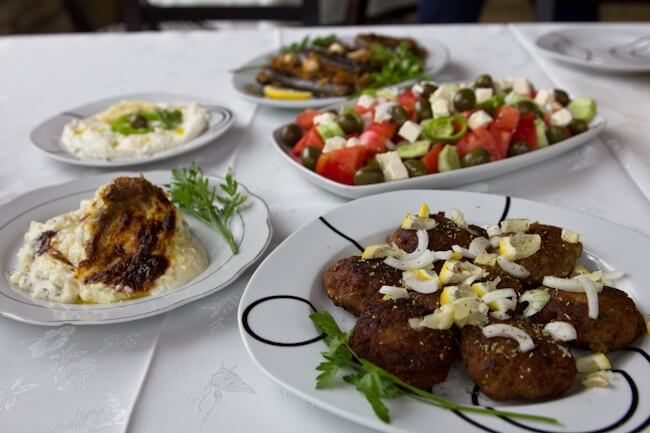 For drinks, Honey Bar is my favourite followed by the University Cafe. Both are relaxed cafes with free wifi and a mixed clientele ie. they aren’t men only bars which are common in Albania. Unfortunately the no smoking ban is not enforced in Berat and none of the bars do cocktails. 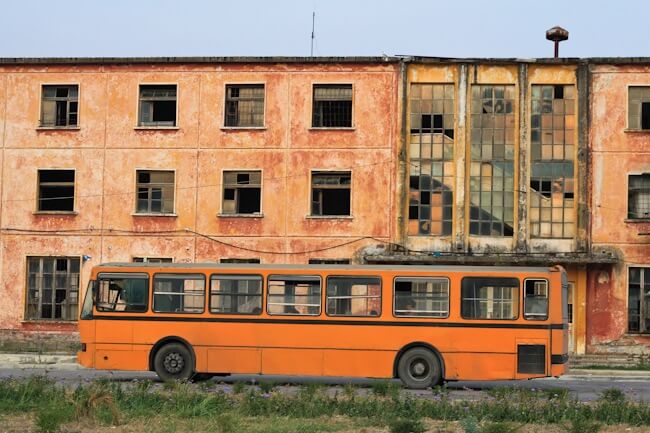 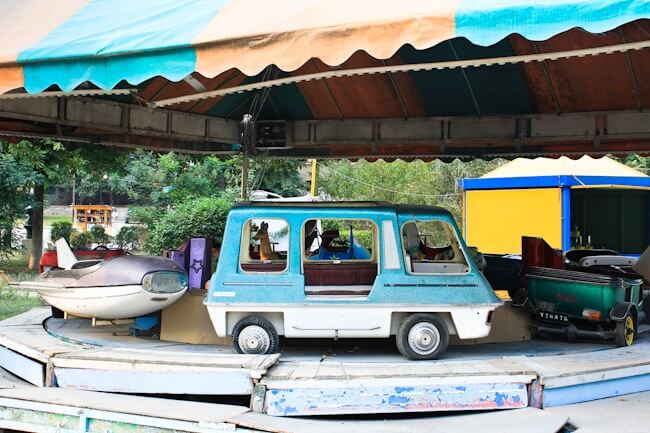 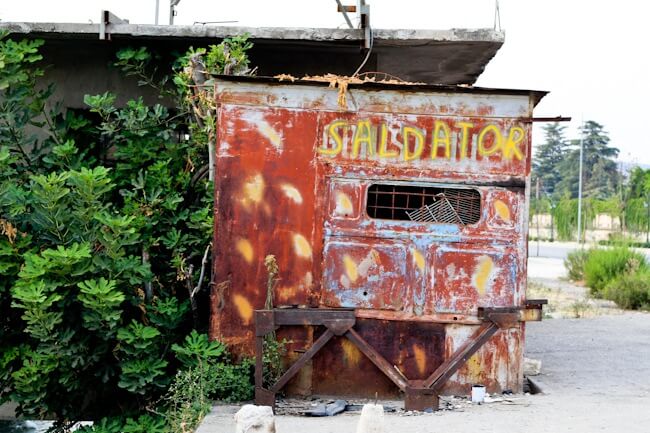 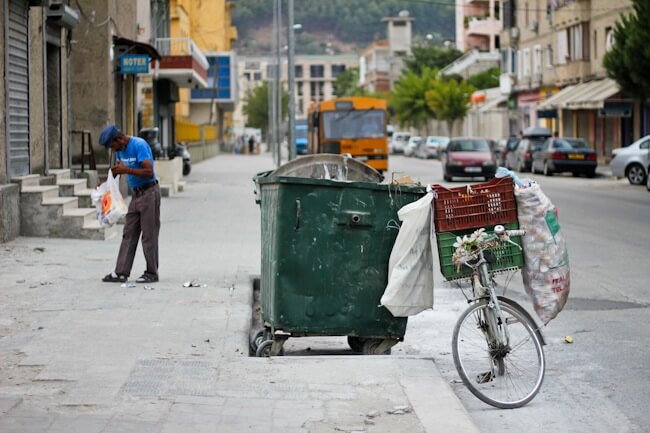 Although the problems faced by the city might seem to be a negative for the tourism industry, there are actually more visitors than ever visiting Berat, especially tourists from France, Germany and the Czechia. Most just spend one night exploring the old town and castle and then head south to Gjirokastra and Butrint. The more adventurous tourists take the time to hike up Mt Tomorri which is worth doing if you want to get away from the city and off the beaten path.

If you’re interested in visiting Berat or the rest of Albania, I have written a comprehensive guide which you can read here.

Note: This post was originally published on DestinationEurope.net in October 2011.