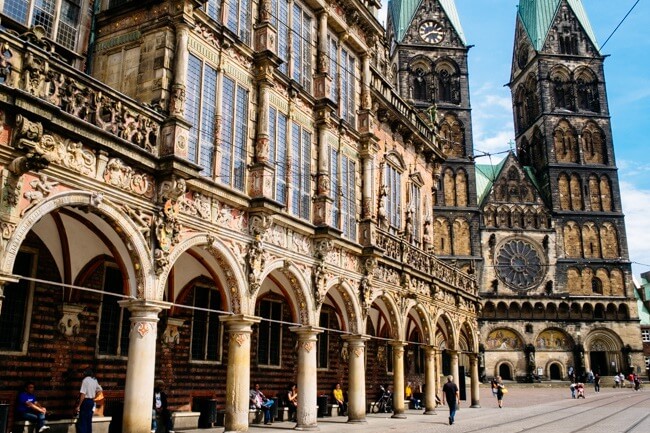 I was debating whether to write a ‘top things to do in Bremen’ type post considering there are so few things to see in Bremen. I think I’ve visited every German city and town that I have ever wanted to. But Bremen was on my list as I’d heard it has a beautiful UNESCO listed historic centre, which it does, but it doesn’t have much more to offer the tourist than that. I saw all the highlights in a quick one hour walk around the city. That’s not to say Bremen isn’t worth a visit, it definitely is, but it only needs to be a quick visit, say one afternoon or maybe a one night stay while on the way to somewhere else.

A scan of the Bremen tourism site shows around 6 top attractions.

If the old town isn’t enough you could also stop by the modern Uberseestadt docklands area and the Das Viertal hipster area. I was in Bremen on my way from Copenhagen to Brussels so didn’t venture further from the Altstadt but I don’t think that’s an issue for a city like Bremen, the whole point is to visit the historic old quarters.

I wouldn’t go out of my way to visit Bremen but if you are interested in UNESCO sites, German culture and folktales, historic sites, or you just happen to be curious then here are my tips for visiting Breman and things to do while there.

Bremen’s Town Hall is the most beautiful building in Bremen and I think the main reason to visit. You can’t miss it on the main Marktplatz with its Gothic and Renaissance style architecture. Along with the Roland statue, the Town Hall is part of Bremen’s UNESCO listing.

Roland was a warrior and hero under Charlemagne and is the protector of the city. According to legend, Bremen will remain free as long as Roland watches over the city. You can watch over Roland from one of the cafes on the main square. 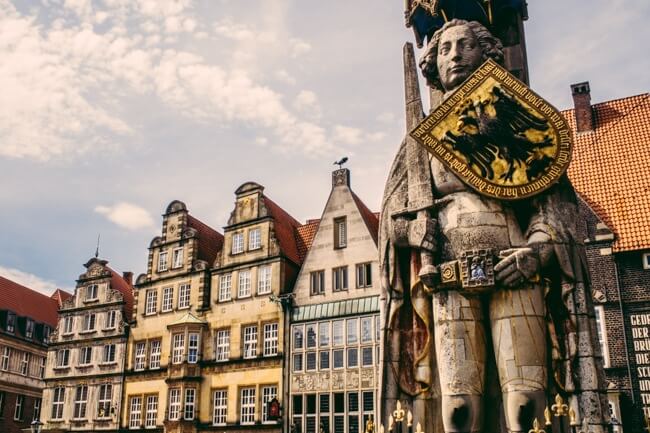 It took me a while to find the statue of the Town Musicians as it’s in a quiet spot to the side of the Town Hall. The statue refers to a folktale by the Brothers Grimm where a donkey, dog, cat and rooster leave their farms for Bremen, a city known for its freedom. 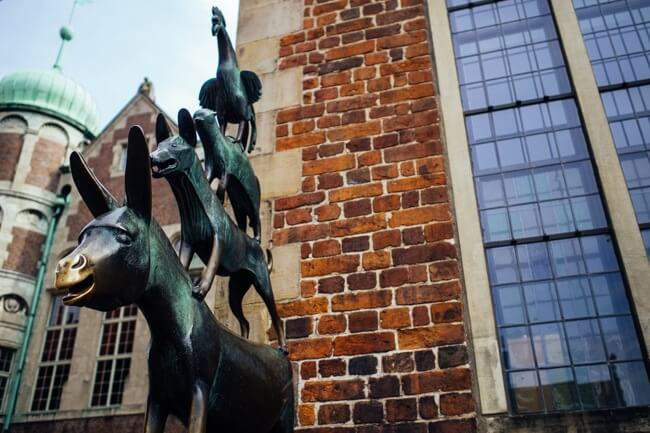 The Schnoor Quarter of Bremen is one of the cutest areas of the city with its narrow lanes and 17th and 18th century architecture. This is the Bremen of old and the city would be incredible if it all looked like this.

This small lane is easy to miss and I did miss it when I first walked by. If you’re on the main square look for the huge gold mural as that’s the entrance to the street. I’ve seen the architecture on Böttcherstrasse described as both Art Nouveau and Expressionist. Whatever it is, it’s quite unusual but nothing mind blowing.

Bremen is mostly a modern city lacking in character which is understandable considering the damage caused during the war. But what remains or has been rebuilt in the traditional style is worth seeing if you’re in the area. It would be a shame not to stop to see the gorgeous Town Hall and Cathedral if you are passing by.

I stayed at the Prizeotel, a budget boutique hotel just behind the main train station. The location is excellent and the rooms, wifi and staff all good. Cheap parking is available across the road so it’s a good spot if you’re road tripping through the region.